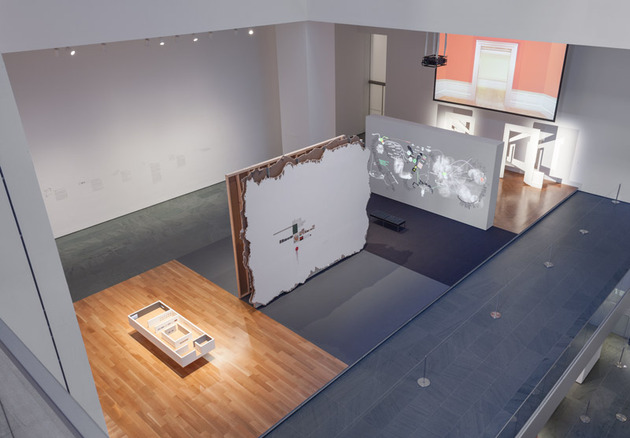 Over the past decade, major museums in Cairo, Copenhagen, Detroit, Doha, Kuwait, London, New York, and other cities have installed or reinstalled their collections of Islamic art. The results have attracted bouquets and brickbats in equal measure. Some of these museums house collections whose origins lie in nineteenth- and early-twentieth-century intersections between antiquarianism, commercialism, and orientalism. Others, especially those in the Gulf, house collections of more recent vintage, whose acquisition over the past two decades has infused the market with a giddy frisson of excess seldom previously associated with Islamic art.1

This reinvestment of Islamic antiquities has been paralleled by the development of Middle Eastern franchises of museums such as the Guggenheim and the Louvre in Abu Dhabi, and the global emergence of an extensive array of galleries and museums dedicated to showcasing the modern and contemporary art of the Middle East. These range from small commercial galleries and private spaces in cities such as Beirut, Cairo, London, New York, and Ramallah to national institutions such as Doha’s Mathaf: Arab Museum of Modern Art, whose opening in 2010 signaled the role of the Gulf region in the vanguard of these developments. At the same time, biennials, exhibitions, and foundations for the collection and promotion of modern and contemporary “Islamic” art have proliferated in the Middle East, Europe, and the United States. Modern Middle Eastern art is enjoying an ongoing canonization as a field of collecting and study (both in its own right and as a chapter in the history of global modernism), witnessed by the establishment of professorships, the writing of doctoral dissertations, and the appointment of curators to such august institutions as the British Museum in London and The Metropolitan Museum of Art in New York.

These developments have taken place against a background of tumultuous political instability and violence in the Middle East, from the United States–led invasion of Iraq in 2003, through Israel’s 2006 war on Lebanon, to the revolutions of the Arab Spring, the reassertion of a U.S.-funded military dictatorship in Egypt, and the transformation of a popular uprising against a brutal Syrian dictatorship into a proxy war fueled by the very petrodollars with which Gulf states are sponsoring their cultural infrastructures and institutions. The worlds of political violence and of the museum have occasionally intersected, with disastrous consequences: in January 2014, the Museum of Islamic Art in Cairo, the world’s oldest museum of Islamic art, was seriously damaged when a car bomb detonated outside the police quarters across the road and almost entirely destroyed the museum’s facade, along with many prize artifacts. 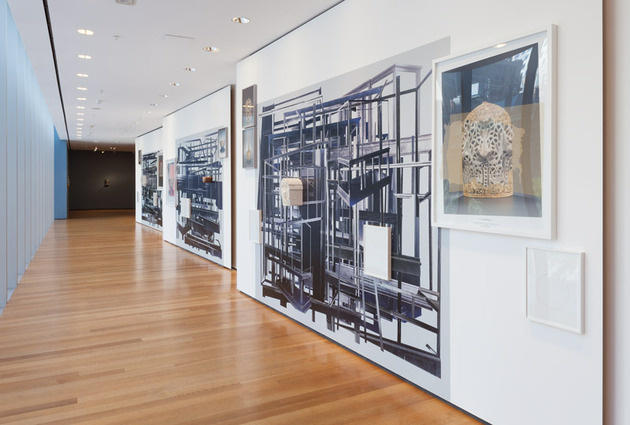 Tensions between contemporary geopolitics, the emergence of major art institutions across the Arab world, and the economic developments that underwrite both provide the background to Walid Raad’s latest project. Scratching on things I could disavow (2007– ) is an amorphous congeries of intersecting images and texts meticulously crafted to interrogate the cultural, economic, material, and political infrastructures that produce and sustain certain kinds of work as art, while questioning the nature of the archives that enable us to write histories of and from artworks. Scratching . . . is an amorphous history of Arab art staged through images, installations, tales, and texts, an assemblage perhaps best encapsulated by the Arabic word athar, which can be variously translated as antiquity, impression, mark, relic, remnant, ruin, or vestige. Raad’s carefully staged constellations of artifacts, images, and narratives are loosely associated by their relation to the histories and historiographies of artistic production in the Arab world, both long entrenched and more recent. They include canonical artifacts of Islamic art, paradigmatic works of Arab modernism that have undergone more recent canonization, and a contemporary canon that is currently under construction and contestation.

The measured ambivalence that permeates the project is implicit both in the conditional disavowal that it evokes and in the “scratching” of the project’s title, with its dual sense of surface archaeology and the relief of capitulating to the masochistic urge to rake one’s fingers across an irritation. In this as in all of Raad‘s work, the materials of and for any history are fragmentary, disjunctive, and recalcitrant. Authoritative data presented as charts and diagrams resist easy co-option or circumscription by practices of representation, being simultaneously offered and withdrawn, asserting even while denying their own historicity. The play with statistical authority in the form of precise dates and carefully numbered captions is also typical. Titles appropriate the standard categories of teleological time while frustrating the expectations that they generate: prefaces, appendixes, interrupted sequences, random dates, partial views, and tantalizing excerpts of orphaned fascicles extracted from series that might never have been or never be—all assert the authority of the catalogue or monograph while simultaneously undermining it. The dialectic between the authority of Roman and Arabic numerals in the sequences of the titles only doubles the play.

Raad co-opts the space of the gallery or museum to autopsy the range of institutions that produce and sustain art as history. He turns his forensic gaze not only on the architectural space of the gallery but also on its sustaining infrastructures, including the institutional gestures and tics that constitute its role as part of the frame that gives work cultural and economic value: the lecture, the PowerPoint presentation, the dissertation, the catalogue essay. Like Raad’s earlier Atlas Group project, Scratching . . . enacts the way that stories spun around objects alter their meaning and value and hence their stability as historical reifications. The project is, in effect, a meta-curation, a performative restaging of the elusive artifacts, histories, practices, and spaces that it engages, with Raad as choreographer, impresario, and medium overseeing installations marked by displacement, shape-shifting, and time travel. 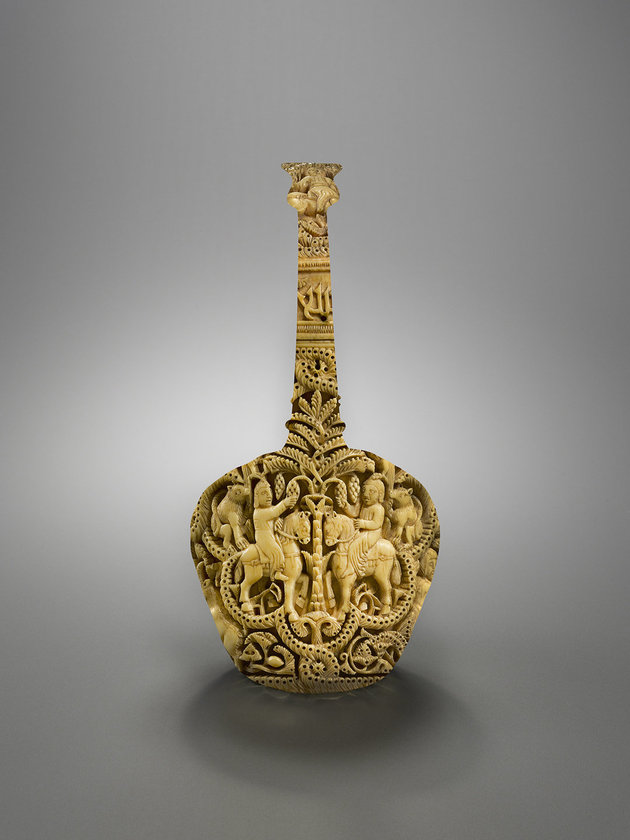 This “meta” quality is enhanced by the imprimatur that Scratching . . . has received not only from long-established sanctuaries of Islamic art but also from newly emergent sites of pilgrimage to the modern and contemporary art of the Arab world. The reopening of the galleries of the Louvre’s Département des Arts de l’Islam in 2012, for example, was accompanied by a series of commissioned works by Raad, which took as their subjects the department’s star objects. Among these, Raad’s 2013 work Preface to the third edition (2013) is a handsome portfolio containing luxurious images of twenty-eight canonical objects of Islamic art in the Louvre’s collection. An accompanying text explains that these are among the 294 objects from the Louvre that will travel to the museum’s new Abu Dhabi franchise (designed by starchitect Jean Nouvel) at some point between 2016 and 2046. On the journey, the text observes, these twenty-eight works will undergo changes whose causes will be contested but that may be material—results of the change in climate, for example; immaterial, manifesting only in the dreams and disorders of the non-Emirati workers constructing such temples of culture; or aesthetic, manifesting only once: in the portfolio’s twenty-eight polychrome photos, purportedly the work of a female artist sponsored to work in the museum in 2026.

The mutations evoked in Preface to the third edition are multiple, from the transformation of three-dimensional artifacts into two-dimensional photographs to the superimposition of one artifact’s surface patterns onto another. This latter cross-fertilization subverts function in the production of striking hybrids, as when a dense floral pattern from a lacquer book-cover comes to pattern the handle of a dagger, or the form of a metal helmet is inhabited by the delicate translucent surface of a medieval rock-crystal vessel. The helmet image is among those that reappear in Footnote II (2015), a recent installation in which photographs and models of Raad’s transformations of the Louvre’s objects are mounted against densely layered archival shots, palimpsest images of the vitrines that once constrained them. Preface to the third edition offers spectacularly beautiful ways of rethinking these objects, destabilizing their deployment as institutionalized representatives of singular times and spaces while presenting canonical artifacts as objets trouvés, like those that feature in Raad’s Atlas Group work.

The process of materialization and transubstantiation assumes more dynamic aspects in the video Preface to the fourth edition (2012). Here, prime objects in the Louvre’s Islamic collection—ceramics, crystals, ivories, metalwork, textiles—flick and flit by the viewer’s gaze, eventually merging and morphing into a dense vortex of incoherent forms and unstable hues. This then resolves into a series of chromatic verticals of variable densities and thicknesses, similar to those that recur in the mixed-media Section 88, Act XXII: Views from outer to inner compartments (2012– ). The extraction of pure color and form from images of historical objects, producing traces of traces, resonates with a core concept of Scratching . . . : according to a text accompanying one of its works, Appendix XVIII: Plates 22–257 (2008– ), the Lebanese wars of the past three decades displaced lines and shapes, colors and forms, which sought refuge not in artworks but in their sustaining documentary infrastructures: budgets, catalogues, covers, diagrams, fonts and footnotes, price lists and the titles of dissertations (especially those by foreign scholars of Lebanese art)—in short, the sorts of materials that feature prominently throughout Scratching. . . .

The transformation of historical artifacts into chromatic abstractions suggests the unstable relation between the museum object and the institutional and material frames that produce and sustain it. Recalling the twentieth-century valorizations of Islamic art as an art of abstraction,2 Raad’s transformations also manifest one of the most original and radical aspects of Scratching . . . : its subversion of the temporal taxonomies that govern the presentation of art, whether in gallery or museum, lecture or text, stratifying the premodern from the modern and both from the contemporary.3 That the historical objects of Islamic art are capable of this kind of transformation suggests more complex imbrications between past and present, underlining the fact that Raad’s history of art in the Arab world neither begins nor ends with modernism. His production of fugitive color from the material certainties of historical objects is an interrogation not simply of chronology, taxonomy, the museum, or even the histories of Arab art, but of the conditions of visibility necessary for the production of histories tout court. In Scratching . . . as in much of Raad’s work, questions of legibility, visibility, and temporality are mutually implicating.

This is the first section of the essay. Read Part 2 here and Part 3 here. Excerpted from Finbarr Barry Flood's essay "Staging Traces of Histories Not Easily Disavowed" in the exhibition catalog Walid Raad available at the MoMA Bookstore.

For a review of some of these developments, albeit omitting some of the more critical voices, see Benoît Junod, Georges Khalil, Stefan Weber, and Gerhard Wolf, eds., Islamic Art and the Museum: Approaches to Art and Archaeology of the Muslim World in the Twenty-first Century (London: Saqi, 2012). See also the essays on collecting and the historiography of the field of Islamic art history in Ars Orientalis no. 30 (2000) and the Journal of Art Historiography no. 6 (June 2012).

See my essay “From the Prophet to Postmodernism? New World Orders and the End of Islamic Art,” in Elizabeth C. Mansfield, ed., Making Art History: A Changing Discipline and Its Institutions (New York: Routledge, 2007), pp. 31–53. The practices of temporal alienation and stratification are directly related to the politics of display, underwriting the narratives of civilizational decline or fall that the rhetoric around Islamic art objects often promotes.

Pre-Figuring Kinshasa City Dwellers in the Streets of Léopoldville: The Photography of Jean...