Associate Curator MoMA PS1 Jenny Schlenzka is Associate Curator at MoMA PS1, principally in charge of live programming. Previously, she was Assistant Curator at PS1. Prior to that, from 2008 to... Read more »
Show Less
Click here to visit the current discussion about this essay.
Keywords: performance, Tehching Hsieh, poster, One Year Performance, MoMA Library, Taiwenese artist, 1980s
Many Places in One: International Connections in MoMA’s Collection Tehching Hsieh’s "One Year Performance"
Essays 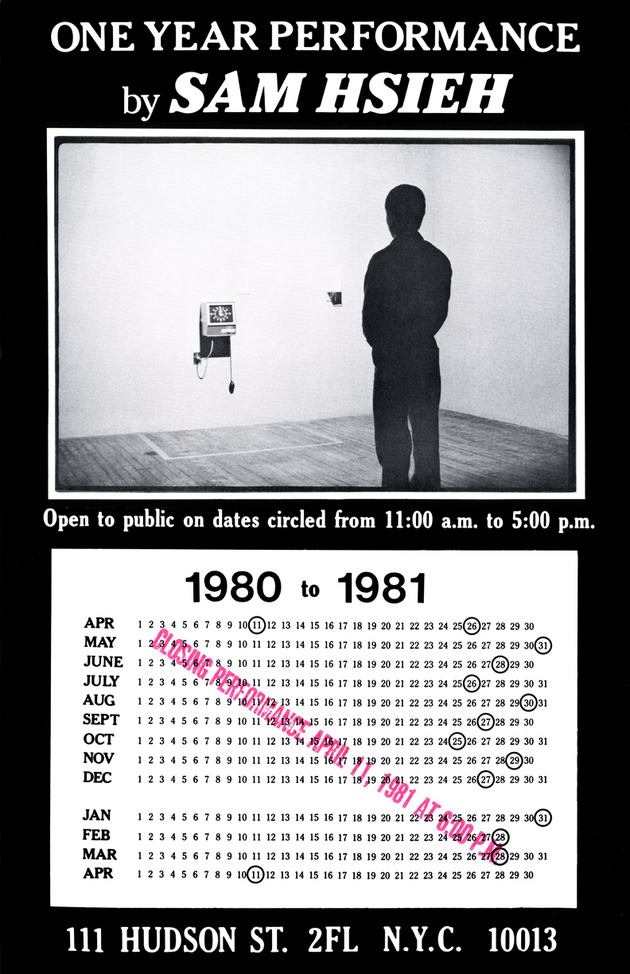 The four posters in the collection of MoMA’s Library are part of One Year Performance 1981–1982 by Tehching Hsieh (Taiwanese, born 1950). To complete this work, which is often referred to as Outdoor Piece, the Taiwanese artist spent 365 days, from September 26, 1981, through September 26, 1982, outdoors, on the streets of Manhattan, with the self-imposed rule of never seeking shelter while only equipped with a sleeping bag and small backpack.

Outdoor Piece is the third in a series of five One Year Performances that have few art-historical counterparts. For each one, Hsieh dedicated an entire year of his life to isolate, and take to the extreme, certain basic conditions of human existence. For One Year Performance 1978–1979, he spent 365 days alone in a cage, with minimal contact with the outside world. The following year, for One Year Performance 1980–1981, he attempted to grapple with time by punching a time clock every hour on the hour, thereby making longer periods of sleep, or any other continuous activity, impossible. 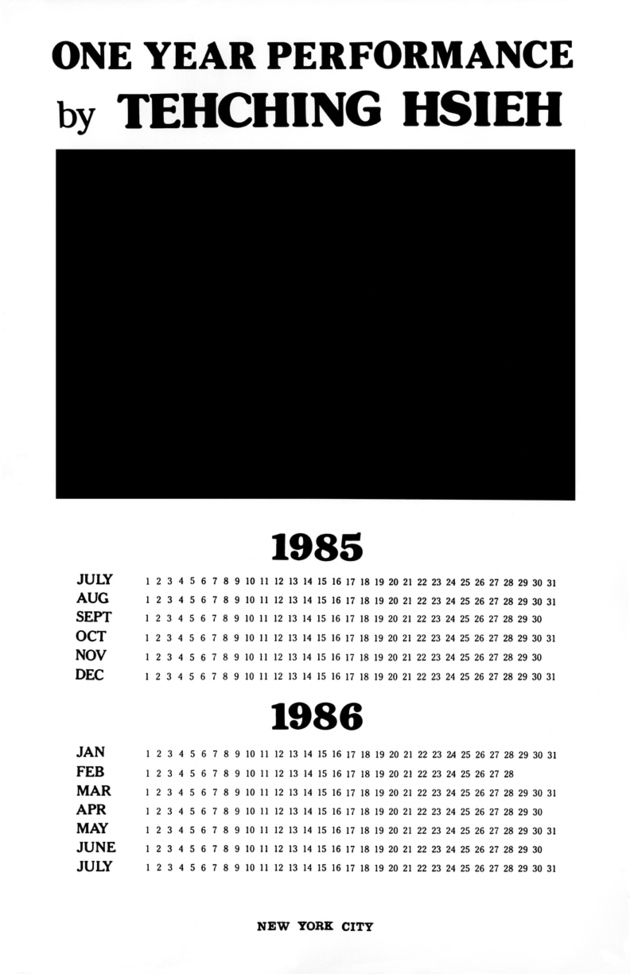 Whereas Outdoor Piece dealt primarily with the human need for shelter, Art/Life One Year Performance 1983–1984 explored human relations. Using a rope, Hsieh spent a year tied to the artist Linda Montano, thus depriving both him and her of any kind of privacy and subjecting their relationship to much strain. One Year Performance 1985–1986, the last of these works, can be interpreted as an abandonment of art, with the artist’s pledge not to do anything related to art for a year and to “just go in life.”

These short summaries stand in sharp contrast to the extended duration of the pieces and thereby emphasize the sheer impossibility of fully grasping Hsieh’s lived experience between 1978 and 1986. If it wasn’t for his ingenuity in documenting these works, the One Year Performances might have become yet another urban legend. Hsieh, however, recorded his experiences and the passage of time with remarkable rigor and precision through photographs, objects, maps, notations, and sound recordings, which together serve as impressive traces of the enormity of his oeuvre. The four posters in MoMA’s collection stem from this archive, originally serving as invitations that enabled audiences to witness Hsieh, who was otherwise mostly alone, during his Outdoor Piece. 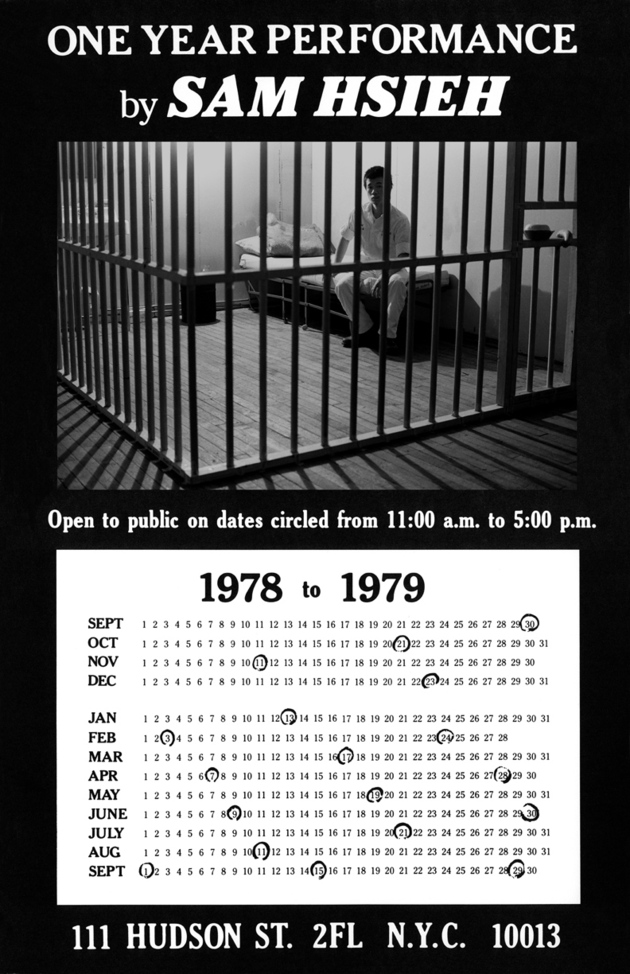 Though all of the One Year Performances took place in New York City, Hsieh’s Taiwanese origins are of great importance to a full understanding his work. The artist’s experience as an illegal immigrant, who had jumped ship at age twenty-four and made his way, with almost no English-language skills, in a foreign society, certainly informed his intense focus on the subjects of solitude, time, shelter, relationships, and abandonment. Now, forty years later, he has become known and respected for this work. After decades spent as an artist known mainly by other artists, he started reaching a broader audience, with his work being shown by major international art institutions (such as MoMA in 2009). In Taiwan he is considered a role model for a generation of younger artists, which was made evident during a recent research trip, part of our cross-departmental initiative C-MAP, when he frequently was cited during studio visits.

The four posters from Outdoor Piece in the MoMA Library’s collection are hopefully just the beginning of a longer engagement with Hsieh’s work in the Museum’s collection. Not only is he one of the most important Taiwanese living artists, his oeuvre situates itself between two recent areas of focus at MoMA: Conceptual art and performance. Hsieh’s formal rigor and preference for lists, numbers, contracts, maps, and the like put him in proximity with 1970s Conceptual art, but the fact that this data represents lived experiences also makes him a central figure in the history of durational performance art. As one of the few artistic practices that truly fulfilled the avant-garde dream of fusing art and life, Hsieh’s works are of central importance to the history of art as it is represented at MoMA and beyond.

Circle the Square: Film Performances by Iimura Takahiko in the 1960s

Circle the Square: Film Performances by Iimura Takahiko in the 1960s

by Julian Ross
Read More »
This Essay is part of: Many Places in One: International Connections in MoMA’s Collection