This essay concerns the “south of the south, the south of South America,”1 written from the north of the north, the north of North America. Drafted from a position of physical distance between author and subject, and troubled by the power dynamics of north gazing south, this selection of works underscores how misconceived geographic verticalities produce social hierarchies, while simultaneously providing a reflexive space for horizontal exchange.

The name “Chile” has its origins in the Quechua word chili, or “the end of the land.” Surrounded by geographic wonders and obstacles—to the west, the Pacific; the north, the Atacama Desert; the east, the Andes Mountains; and the south, Patagonia—Chile’s terrestrial isolation has both practical and cultural consequences that have limited access for both Chilean artists connecting with a world beyond its borders, and foreign arts professionals looking in. Despite such challenges, in several historical instances during the 1970s and 1980s, artists working from within Chile’s capital city sought to create projects that involved Chilean artists residing abroad, many of whom maintained strong connections with their country of origin. Artists working from both inside Chile and abroad have addressed issues related to American2 identity as a thematic focus of their work and sought to develop Americas-specific networks. 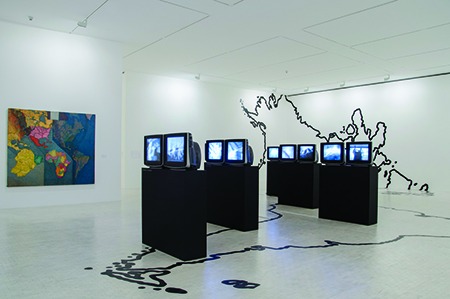 Juan Downey’s foundational video installation Video Trans Americas (Trans American Video, 1976), originated from the culture shock he experienced as a South American artist and architect living in New York City. Following nearly a decade away from his home country, in 1973 he embarked on a three-year series of journeys to document the people of Mexico, Guatemala, Peru, Bolivia, and Chile. There he sought to access his desire “to take root once again in the essence of that which was Latin American, in such a way that the map of the American continents was a metaphor of my confused mind: then, as I began to pick up the pieces, a process of introspection commenced.”3 The Americas appear here as a vast and muddled concept through which Downey expressed a desire for a somehow correlated transcendence. His confusion might rightfully have been a product of residing in a country that appropriates the term “America” all for itself, when he himself hailed from a far-off land where school children learn that there are six, not seven continents (in the far south, North and South America are one). Positioning himself as “a cultural communicant, an activating anthropologist with visual means of expression: videotape,”4 Downey intended to record neighboring cultures in the Americas and stage screenings of his tapes for each community as he traveled while making Video Trans Americas. The project’s multiple end products, however, were intended for North American audiences—including a performance featuring Chilean dancer and choreographer Carmen Beuchat, and a fourteen-channel video installation that weaves together Downey’s extensive footage, which is displayed on monitors spread out over a large map of the singular continent.

What are the liberating or colonializing implications of an artist from the far south initiating a proposal from his base in the north that employs the latest in Western technology to create a network of cultures that he believed were otherwise isolated from each other?5 Downey’s utopian view that technology could service the humanist pursuit of uniting the people of the Americas was temporarily exhausted just two months into his first journey, when Augusto Pinochet led a violent coup d’état, backed by the US government, in Chile. In the face of this calculated transnational use of force, Downey maintained the humanizing potential of a networked continent, using technology as a tool for liberation when wielded by the hand of the artist. 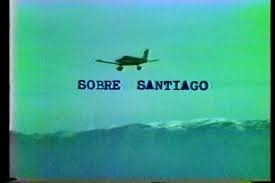 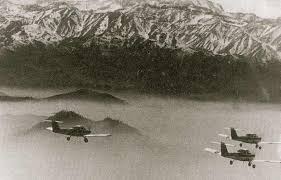 Such an allegiance to new media, and potentially militarized technology, was reflected in a work produced inside Chile by the multidisciplinary artists’ collective CADA (Colectivo Acciones de Arte). Originally comprised of visual artists Lotty Rosenfeld and Juan Castillo, poet Raúl Zurita, novelist Diamela Eltit, and sociologist Fernando Balcells, CADA’s elaborate staging of highly coded political statements manifested in the form of “art actions” carried out in Santiago beginning in 1979. Their iconic work ¡Ay Sudamérica! (Oh, South America!, 1981) was an art action for which the artists designed, printed, and distributed a statement on the relationship between everyday life and art by way of the skies above. To do so, they hired six planes to fly in perfect formation and drop four hundred thousand leaflets across Santiago, referencing the bombardment of the presidential palace and central house of government in 1973 and imbuing their work with a suggestion of violence that is complicated by the romanticism of their gesture.6 Though the work references the military government’s tactics, it likewise speaks to the militant left’s own attempts to sway the population to revolt during the 1970s and 1980s, activities in which some members of CADA directly participated.7 In ¡Ay Sudamérica! CADA’s text unites the missions of the Andean people from all walks of life with the task of artists:

“When you walk across these places and you look at the sky and below it, the snow-capped heights, you recognize in this site the space of our lives: dark skin, stature and language, thought . . . We are artists, but every man who works for the enlargement of his spaces in life, even if it is a mental one, is an artist, which means that we must name work in life as the only creative form . . . the work of enlargement of the usual levels of life is the only valid art installation. The only work of art that lives. We feel [that we are] participating in everyone’s great aspirations, today presuming, with South American love, the gliding of your eyes over these lines. Ay Sudamérica. [And so together we construct the beginning of the artwork: recognition in our minds; erasing function:] life as a creative act.”8

CADA’s action is captured today in the form of a three-channel video installation: One monitor dryly displays the printing press as it repetitively marks compact masses of flyers before their release. Another shows the planes in formation, filmed from above, edging along the Andes Mountains. And a third dwells on the glistening affects, from below, of the flyers that fall from the sky as their text, which is overlaid on the footage, is also read aloud in English. Such material sits somewhere between documentation and video art, much like Downey’s own, more biographical recordings. The choice to distribute the leaflets in the first place evidences a willingness to move beyond the traditional spheres of art in order to encounter a South American public on their own terrain. Simultaneously, the choice to include an English translation suggests a desire to connect beyond the border of the Andes. Overcoming self-censorship through the large-scale release of a manifesto-like communication, CADA remedies its territorial isolation in Chile by linking its cultural production with popular culture and international art circuits. 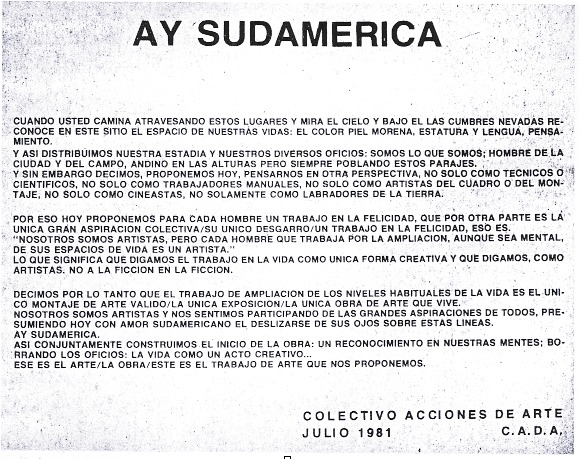 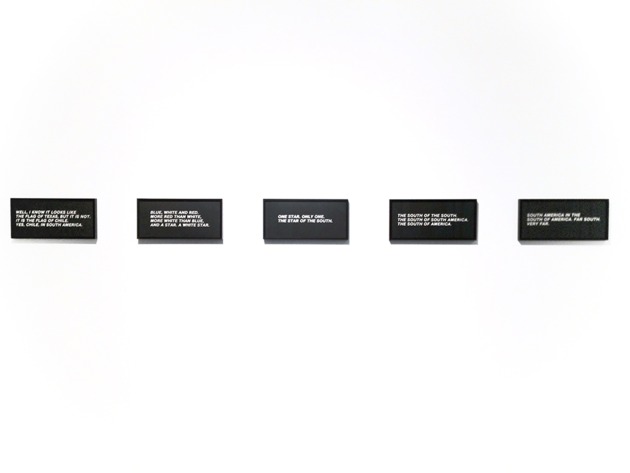 When Alfredo Jaar arrived in the U.S. in the early 1980s, he connected with artists of the Chilean diaspora including Downey, whom he invited to participate in In/Out: Four Projects by Chilean Artists, an exhibition that he curated at the Washington Project for the Arts, an alternative space in Washington, DC, in 1983. Jaar included his own work and Downey’s to represent Chilean artists residing in the US, and that of the graphic artist Eugenio Dittborn and CADA to represent artists still working from within Chile. Jaar presented Stars (1982), a text-based installation conceived in New York from his perspective as a recent immigrant. Laid out in his signature Letraset, it directly addressed the issue of the north's preying on the south, referring—in Jaar’s self-proclaimed “rudimentary English”—to the US government’s involvement in the military intervention. The work exudes the sense of shock that Jaar experienced at the US metropolitan populace's ignorance of his austral reality. In a haggard tone, he comments: “Well, I know it looks like the flag of Texas, but it is not. It’s the flag of Chile. Yes, Chile, in South America . . . One Star. Only One. The Star of the South. The South of the South. The South of South America . . . South America in the South of America. Far South. Very Far.” Jaar’s exasperated statement also serves to highlight the US government’s mistaken claim over the national sovereignty of a far-off land. 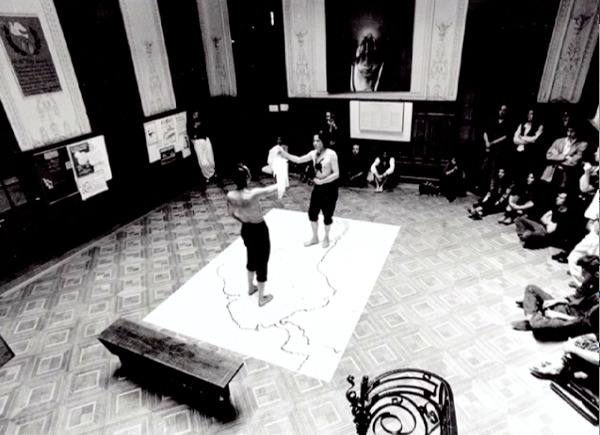 In 1989 the artist duo Yeguas del Apocalipsis, comprised of Pedro Lemebel and Francisco Casas, performed their dramatically staged work, La conquista de América (The conquest of America), in the Chilean Commission for Human Rights in Santiago. Dressed in matching black pants, they danced barefoot over a map of South America that was littered with fragments of broken Coca-Cola bottles. Each artist had a small personal speaker strapped to his naked chest, from which emanated the sounds of la cueca, Chile’s national dance. La cueca emulates the courtship customs of a rooster and a hen, the rooster aiming to conquer the hen through the act of encircling her. The dance’s heteronormative dynamics, in which the female dancer remains docile while the male aggresses, was seized upon by the military dictatorship, which declared la cueca the national dance in 1979. At the same time that the dominant culture appropriated this custom, the families of the disappeared victims of the regime practiced their own version—la cueca sola—a dance performed by one person, typically the mother or wife of a desaparecido. Each dancer’s solitary performance stood for her loss of a life partner and pain, and came to be a recognized form of protest. As two male, leftist, and homosexual dancers, Lemebel and Casas both adopt the steps of the female dancer performing la cueca sola rather than performing the sanctioned version of the dance. The specificity of their local references does not isolate las Yeguas or their country from the collective experience of trauma under military dictatorships in Latin America. According to the artists’ imagery, their bloodied feet muddling the map, America is stained by Chile, and Chile is in America.

When asked in an interview, “Do you miss Chile?,” Jaar responded, “No, not the Chile that I know. What I miss is Latin America, that Latin America that could be, that should be.”9 Though he admits that such a place has never existed, passing from the fiction of the French to the political and economic playground of the US, Jaar notes, “But I am working on that. Well, this is, probably what my work is all about.” The twenty-first century is faced with the unique opportunity that surfaced only as a small spark in Downey’s time—the creation of collaborations that fuse art and life, working toward the integrated, inclusive, and flattened notions of the Americas from multilateral directions.

This text is borrowed from Alfredo Jaar's work Stars (1982).

The author utilizes the term “American” here and elsewhere to refer to that which is of, or related to, the Americas, as in the French concept of “L’Amérique.”

From Downey’s travelogues, cited in Juan Downey: With Energy Beyond these Walls, 330.

On September 11, 1973, General Augusto Pinochet lead a coup d’état to overthrow the democratically elected, socialist president, Salvador Allende, which resulted in the seizure of the presidential palace and Allende’s death, followed by the installation of a military government in Chile. The US government aided in creating the conditions for the coup to ensue and supported the Pinochet government.

Adapted by the author from the translation made available in the audio of the video installation.

A Conversation with Adriana Valdés (Part 2)

This Essay is part of: Transmissions in art from Eastern Europe & Latin America, 1960–1980: Research Files

A Conversation with Adriana Valdés (Part 1)