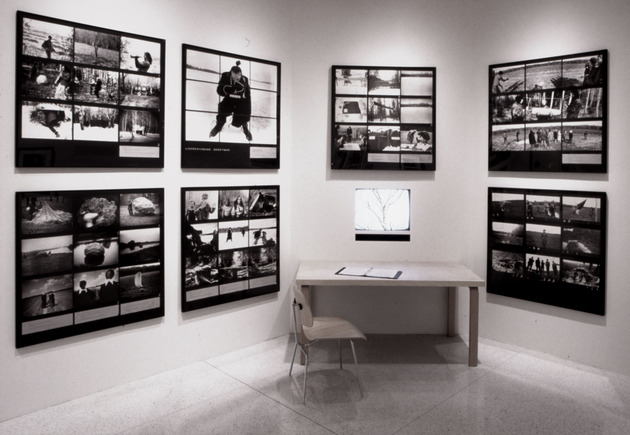 1. How did you get involved in the exhibition?

When Global Conceptualism was planned, I had already curated several exhibitions dedicated to Moscow Conceptualism. In 1981 the collector Norton Dodge offered me a curatorial position at the Contemporary Russian Art Center of America, which he established that same year in New York. The first show I curated there was Russian New Wave. It combined Conceptualists still living in Russia and those who had immigrated to New York. At that time the art world was only familiar with the work of Vitaly Komar and Aleksandr Melamid, first presented in 1976 in a highly acclaimed exhibition Color is a Mighty Power! organized by Ronald Feldman Fine Arts. I attended the opening, during which Charlotte Moorman played Komar and Melamid’s piece, Music “Passport”. By exhibiting Komar and Melamid in a gallery that had also shown Marcel Duchamp and Chris Burden, Ronald Feldman integrated Komar and Melamid into the historical and contemporary contexts of Conceptual art. This gave Moscow Conceptualism a significant push. During perestroika1, I curated a number of exhibitions of Conceptual art, among which were The Green Show (Exit Art, 1990) and Between Spring and Summer: Soviet Conceptual Art in the Era of Late Communism (Tacoma Art Museum and ICA, Boston, 1990), which I co-curated with David Ross and Elisabeth Sussman. Jane Farver mentions these two exhibitions in her essay “Global Conceptualism: Reflections”, so I believe this played a role in her decision to invite me to curate the Russian section of Global Conceptualism.

2. How did you approach the label “Conceptualism”?

I based my selections on the differences rather than similarities between Moscow and Western Conceptualisms. In the mid-1960s, a handful of artists (Ilya Kabakov and Erik Bulatov among them) reacted to the supremacy of the verbal and the scarcity of the visual in Soviet culture. They also faced the prolonged absence of critics who positioned artists of the counterculture as the sole interpreters of their own production. Unlike in the case of the Western Conceptualists, it was easy for Moscow artists to dismiss the art object because there was neither public space for its display nor a market for its dissemination. Thus, instead of opposing art-as-commodity, they resisted art-as-mechanism for ideological control, which automatically made Conceptual art political. In these circumstances, “art-as-idea,” “art-as-knowledge,” and “artist-as-an interpreter” were logical practices for them to adopt. In my selections for Global Conceptualism, I aimed at reflecting the artists’ responses to these unique cultural conditions of “seeing words instead of objects.” I divided my selections into two parts: works that challenge political (Komar and Melamid) and communal (Kabakov) speech head on, and works that demonstrate the escapist approach toward the inundation of the verbal clichés (Irina Nakhova and Collective Actions group). I also stressed the importance of photography in Conceptual art by including in my section of Global Conceptualism, Boris Mikhailov’s photo-book, Unfinished Dissertation, in which he re-situates photography as an independent medium rather than a handmaiden to the fine arts. Mikhailov’s annotations, which accompany each image, present a critical deconstruction of photography’s documentary promises.

3. Would you have done anything differently?

Every time a curator thinks of past exhibitions, he/she questions if they could have been done differently. Usually this has to do with the loans on which every curator depends heavily and which are not always available. Because Global Conceptualism took place in the post-Soviet period, I did not face any problems with securing the artworks I wanted. Beyond the loans, I think it’s not particularly productive to think about past exhibitions in the subjunctive tense, for one’s connection with that particular historical moment is partially lost, and thus the evaluation of previous curatorial projects is hardly objective because it’s tainted by new perspectives. Also, in Global Conceptualism, each curator had to work within a very limited exhibition space and under the supervision of the three main curators. Although our collaboration was rather efficient, I do not think that this is the best curatorial arrangement.

4. Today the artists, including Vitaly Komar and Aleksandr Melamid, Ilya Kabakov, Irina Nakhova, and Andrei Monastyrski, who were associated with Moscow Conceptualism are well-known internationally. Though Global Conceptualism: Points of Origin, 1950s–1980s was not the first exhibition in New York City, or even the United States to display works by these artists, could you describe the effects you think the exhibition had by exposing a larger and more diverse audience to these works specifically situated within the context of global Conceptual art practices?

Any exposure to a larger audience is good for artists and the study of historical movements. Unification of international artists who work in a similar mode gives a viewer the opportunity to observe what Lucy Lippard described as “the spontaneous appearance of similar work totally unknown to the artists.” This of course gives the artists a broader understanding and a more objective evaluation of their production. For viewers, such an exhibition dilutes the contextual specifics of each region, for it comes across as a conceptually unified project. Undoubtedly for the artists from the Soviet Union, Latin America, Asia, and Africa, exhibiting with Europeans and North Americans meant integration into an already existing Western genealogy of Conceptual art. Whether it did or could work is another question. But Global Conceptualism was one of the first attempts to unite the international community of postwar artists under the umbrella of one movement.

5. What are the legacies of these conceptual tendencies in Russia today?

During perestroika, Moscow Conceptualism was revered in Russia because, along with Sots Art, it was the only postwar art movement that was able to stand on an equal footing with international art movements. This remains true today, for although the collapse of the Soviet Union opened up many opportunities to contemporary artists, the theoretical and aesthetic intensity achieved by Moscow Conceptualists, has not yet been matched and can only be compared with the movements of the historical avant-garde.

6. How did your work on the exhibition Global Conceptualism: Points of Origin, 1950s–1980s affect your later work as a scholar and curator?

Curators of a non-mainstream art must always ask themselves if they are able to organize exhibitions that transcend a narrow expertise. Being part of Global Conceptualism made me want to test my skills and methods in other fields, or at least conceive exhibitions that include more than just Russian artists. This worked particularly well with the concepts developed by Russian avant-garde artists that I traced in artistic production throughout the twentieth century in several exhibitions I curated after Global Conceptualism. These were Malevich and Film (Fundação Centro Cultural Belém, Lisbon, 2002) and Against Kandinsky (Museum Villa Stuck, 2006). Moreover, the year Global Conceptualism opened, I was invited to curate a major exhibition on the Bauhaus called Bauhaus: Dessau, Chicago, New York (Museum Folkwang, 2000). I do not think I would have had the courage to take this project on if I had not first mentally transcended, by participating in Global Conceptualism, the sociocultural specificity of Russian art.

Perestroika was a period of restructuring and reforming the Soviet Union, initiated by Soviet leader Mikhail Gorbachev in 1986, which allowed for increased political, social, and economic freedoms.

An Empty Action is Not for a Movie Camera: "The Balloon" by Collective Actions Group

by Jane Farver
Read More »
This Interview is part of: Global Conceptualism Reconsidered