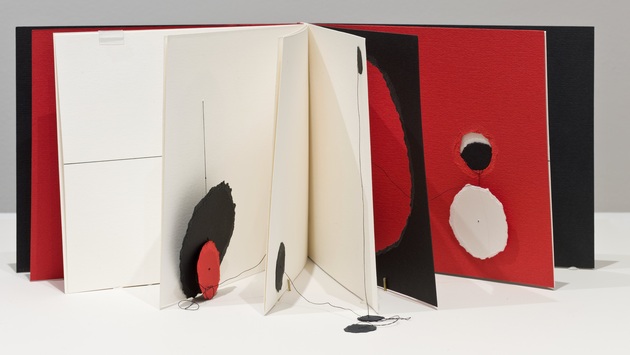 Anna Maria Maiolino (Brazilian, born Italy, 1942) refers to Trajetória I (1976) as a “Book Object,” a term that aptly describes the way it combines aspects of a book with those of a sculpture. Although comprised of eleven folios of black, white, and red papers bound into a black paper cover, it does not include text or illustrations. Instead, the pages contain torn holes of various sizes and torn-paper circles that are loosely held inside the book by a long black thread, which has been stitched in at selected points and left to droop and tangle upon itself otherwise. When displayed standing up with its pages fanned open, Trajetória I becomes a sculptural object. But the primary way to experience the work is by interacting with it in an intimate, tactile way—by turning its pages and allowing the different visual and spatial configurations on each spread to reveal themselves gradually over time.

The 1970s were a breakthrough period for Maiolino, when paper emerged as one of her primary mediums. In addition to the six “Book Objects” that she made in 1976 (including Trajetória I), she made a series of “Print Objects” in 1971–72 and a substantial body of “Drawing Objects” between 1971 and 1976. All of these works incorporate tearing, folding, and/or layering of paper in such a way that it becomes, to some degree, three dimensional. Maiolino’s holes and tears often expose voids, reflecting her interest in what she called “the other space of the absent, the latent, the concealed.”Created at a time when the military dictatorship in Brazil censored all media and tortured and exiled dissidents, such comments suggest, perhaps, that political and existential concerns are subtly inflecting her sensual and geometric forms. Maiolino has called the threads that she sometimes incorporated into these works “traces of a journey that point to the possibility of the existence of other planes.”

Maiolino was one of several Brazilian artists who manipulated paper in highly creative and unorthodox ways in the 1970s—a period of extraordinary conceptual and aesthetic experimentation. Lygia Clark, Lygia Pape, Hélio Oiticica, and Mira Schendel—artists who, like Maiolino, were involved to varying degrees with Neo-Concretism, a movement that involved the introduction of organic, subjective forms and sensorial participation into geometric abstraction—all took a quasi-sculptural approach to paper and devised methods of puncturing, cutting, molding, and folding it to create radically inventive works of art. Though grounded in that specific cultural moment in Brazil, Trajetória I can also be related to several broad international art currents of the 1970s. Maiolino’s interest in spatial geometries and in the actions of tearing, folding, and sewing correlates with aspects of Minimalism, Post-Minimalism, Process Art, and other international developments, from the slashes and punctures in Lucio Fontana’s canvases and works on paper to Dorothea Rockburne’s folded-paper constructions.

A Zeppelin Voyage and the Artists' Book Movement in Mexico

A Zeppelin Voyage and the Artists' Book Movement in Mexico

by Wendy Woon
Read More »
This Essay is part of: Many Places in One: International Connections in MoMA’s Collection