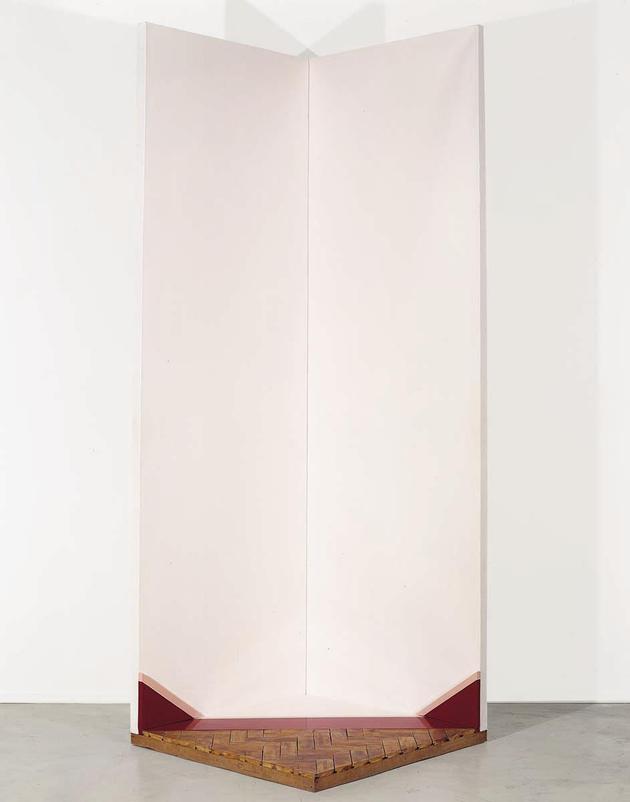 Virtual Spaces: Corner 1 (1967–68) simulates, with a twist, the corner of a domestic room, complete with parquet flooring, a painted baseboard, and canvas-covered walls. It is the first of a series of works that marked a breakthrough in Cildo Meireles’s artistic trajectory when he was only nineteen years old. “At the end of 1967, I created a series of preparatory drawings for the Virtual Spaces: Corners. I realized that art school was not going to give me what I wanted, so, to produce Corners, I moved to a small town between Rio and São Paulo called Paraty, where I had a large studio.”1 Life-size in scale, this part-painting/part-object relies on the movement of the viewer. “These works are about orthogonal virtual effects obtained from non-orthogonal projection planes. They provide an analysis of the phenomenon of virtuality through Euclidean principles of space (three planes of projection) transposed to the image of an internal corner of a house.”2 Meireles's Corners series provided the artist with an opportunity to explore solutions to questions of mathematics and geometry, disciplines that have always attracted him: “The works in the series were very much conceived as theorems. They are a demonstration, not specifically in terms of the eye, but in terms of the position of the viewer in relation to the work. They presuppose the viewer’s displacement, and the finding of this position.”3

Central to Meireles’s art is an expanded notion of space that encompasses its “physical, geometric, historical, psychological, topological, and anthropological” dimensions. Considered the most influential Brazilian artist of his generation and a key reference for Conceptual art internationally, he has developed an oeuvre that combines mental constructs with direct physical experience in an unusually diverse body of works that often resist and circumvent marketability. Meireles was born in 1948 in Rio de Janeiro. The son of an Indianist who worked for the Indian Protection Service, Meireles had a peripatetic childhood, accompanying his family in moves throughout the vast Brazilian territory, participating in pioneering expeditions and residing in Curitiba, Belém do Pará, Goiânia, Maranhão, and Brasília (the latter before its inauguration as the country’s newly constructed capital). Meireles began making art in 1963, at age fifteen, and by 1967 he was producing works such as Virtual Spaces: Corner 1, which address formal and conceptual issues that continue to occupy him to this day.

Coming of age as an artist at the height of the dictatorship in Brazil, Meireles became increasingly politically engaged, exploiting existing systems of distribution to disseminate antiestablishment ideas, such as in his famous Insertions in Ideological Circuits. In 1969 Meireles participated in the Salão da Bússola with the first three Virtual Spaces: Corners, for which he won first prize. Seeing these works in the exhibition prompted Kynaston McShine, in Rio in 1969, to invite Meireles to participate in his Information exhibition, which would take place at MoMA the following year. In 1971 Meireles moved to New York, but he returned to Brazil in 1973. He currently lives and works in Rio de Janeiro. Virtual Spaces: Corner 1 represents a touchstone in Meireles’s early work, one that uniquely prefigures his interest in perceptual paradoxes and spatial ambiguities, a preoccupation that would recur in his practice for decades.

by Antonio Dias, Lilian Tone
Read More »
This Essay is part of: Many Places in One: International Connections in MoMA’s Collection