Leah Dickerman is the Marlene Hess Curator of Painting and Sculpture at the Museum of Modern Art. Before coming to MoMA, she was Acting Head of the Department of Modern... Read more »
Show Less
Click here to visit the current discussion about this essay.
Keywords: MoMA Collection
Many Places in One: International Connections in MoMA’s Collection Běla Kolářová's "Five by Four"
Essays 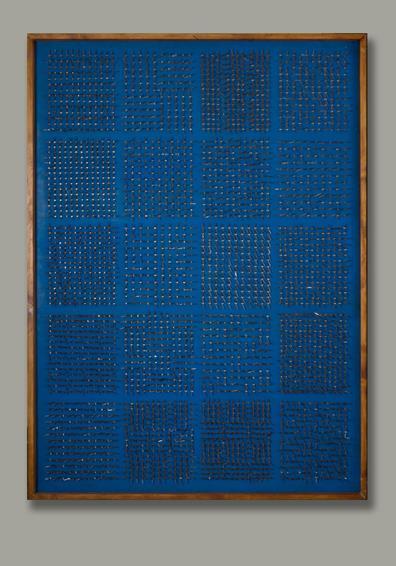 Czech artist Běla Kolářová was a key figure in Prague's intellectual circles in the decade of the 1960s, a time of great optimism in Soviet-bloc Czechoslovakia, one of both relative political freedom and cultural searching. The home she shared with her partner, the artist and poet Jiří Kolář, was the center of a progressive artistic and intellectual community and the site of many informal seminars to discuss pressing artistic and cultural topics. Kolářová and those in her circle adamantly rejected the fossilized language of socialist realism inherited from the Soviet Union and instead oriented themselves toward an international avant-garde, and the strategies of Fluxus and forms of conceptualism, in particular.

In its exploration of the strangeness and beauty of ordinary things, and in her experimentation with the mediums of photography, collage, and assemblage, Kolářová’s body of work reflects the legacy of Dada and Surrealism. Objects are agents of form in her work: early in her career, she made photographs and photograms of tabletop collections of household things, called “traces,” in which small items were imprinted in wax spread over a celluloid sheet. Many of these suggest a type of secret writing, the hidden “form of a calligraph, a letter or a cipher” emerging from her object-poems.

In the mid-1960s she moved away from photography and photo-based procedures to make assemblages. “The camera limited me,” she wrote. “A shot of a moment in time cannot express how...objects change, shine and go out according to the light, how they revive with their own shadows. So I stopped photographing and started gluing.” Her assemblages incorporated the utility objects of modern culture—small mass-produced things such as paper clips, paper fasteners, matches, metal washers—which she described as having “no value for advertising or sale.” Five by Four is the most ambitious and historically significant of this series of works. Groups of paper fasteners are mounted in gridded blocks on blue-painted plywood, their tiny prongs casting animated shadows.

Five by Four not only adds nuance and geographic specificity to MoMAs collection of works from the transformative decade of the 1960s, the work also offers the opportunity to suggest a multi-perspectival, international dialogue of common concerns when considered alongside related practices by artists such as Eva Hesse, Piero Manzoni, and Günther Uecker.

This Essay is part of: Many Places in One: International Connections in MoMA’s Collection Transmissions in art from Eastern Europe & Latin America, 1960–1980: Research Files