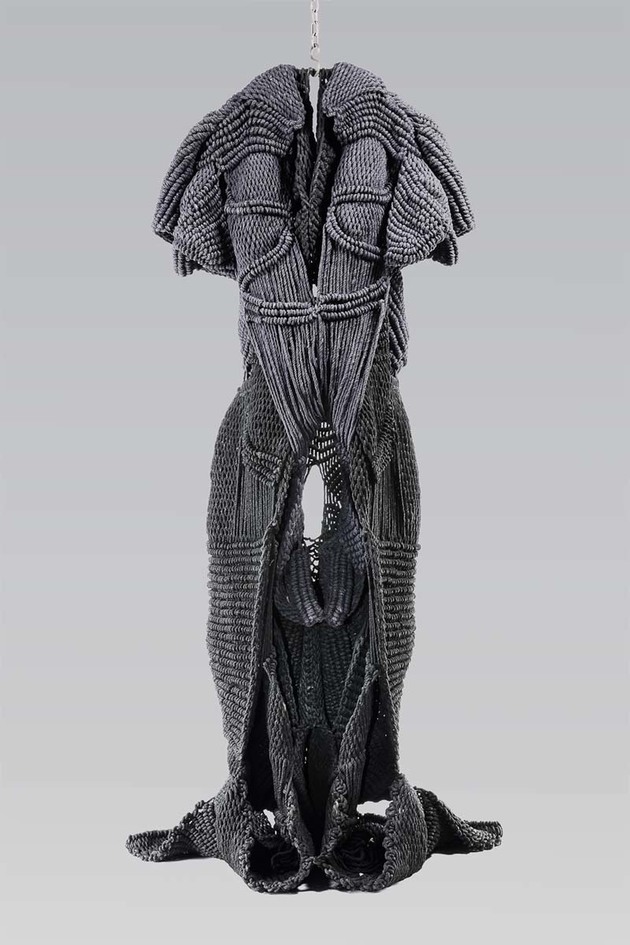 The Indian artist Mrinalini Mukherjee (1949–2015) said that she wanted her sculptures to conjure “the feeling of awe [you get] when you walk into the small sanctum of a temple and look up to be held by an iconic presence.”1 This is exactly the sensation one feels when viewing Yakshi (1984), a hulking, sinewy, dresslike form rendered in a Bengali natural rope fiber called sunn or sann, which, similar to hemp, slumps and droops, exaggerating the weightiness of its plaited material (fig. 1). The “organic unfolding”2 of these pliable planes alludes to the painstaking process by which the work was created, to the hours of meticulous handwork. Its colors—a muted black and an inky blue-purple—defamiliarize the artist’s material of choice, foregoing the wheat–sheaf golden brown of traditional rope fiber, in favor of the rich hues possible with synthetic dye baths.

Mukherjee’s handwrought, labor-intensive approach stands out in contrast to the dominant narratives of Western art history—in part because her sculpture, like that of so many other artists working in fiber in Europe and the United States in the 1960s, ’70s, and ’80s, could easily have been labeled “fiber art” or “craft,” a designation that critically disenfranchised a generation of skilled artists that included Magdalena Abakanowicz, Sheila Hicks, and Lenore Tawney. Given Mukherjee’s choice of material, she, too, might have been pigeonholed as a “fiber artist” or “craftsperson,” and not given the appropriate critical appraisal befitting a sculptor of her caliber. Investigating her sources of inspiration, her life in post-Partition India, her approach to materials and processes, and her relative isolation from the Western art world clarifies why her position in the “ambit of contemporary sculpture”3 today aligns more closely with that of other sculptors working in fiber mediums, like Robert Morris and Eva Hesse, who have long enjoyed critical recognition. 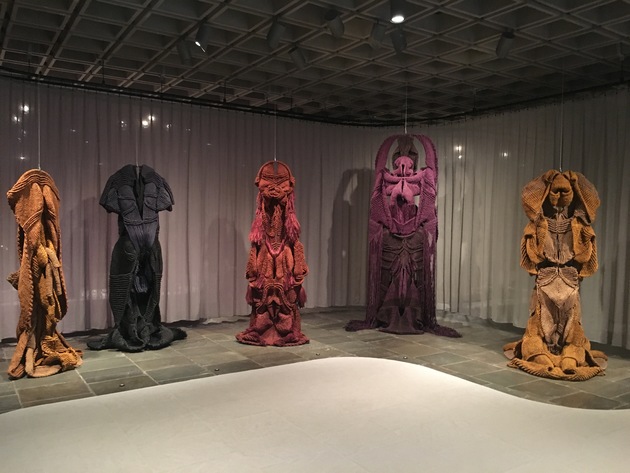 Yakshi is one in a series of monumental “deities” (fig. 2) that, from the 1980s, address Mukherjee’s interest in the realm of the natural and the layered iconographic histories of her native India. The series calls upon the Indian performance traditions of Theyyam and Kathakali dances, which employ masks and theatrical costumes, but they also are highly personalized manifestations of the artist’s inner life (fig. 3). As Mukherjee told curator Chrissie Iles in an interview published in the catalogue accompanying a 1994 exhibition at Oxford University: “My anthropomorphic deities owe much to the equation with awe and reverence that a traditional invocatory deity inspires in her spectator. But my mythology is de-conventionalized and personal, as indeed are my methods and materials.”4 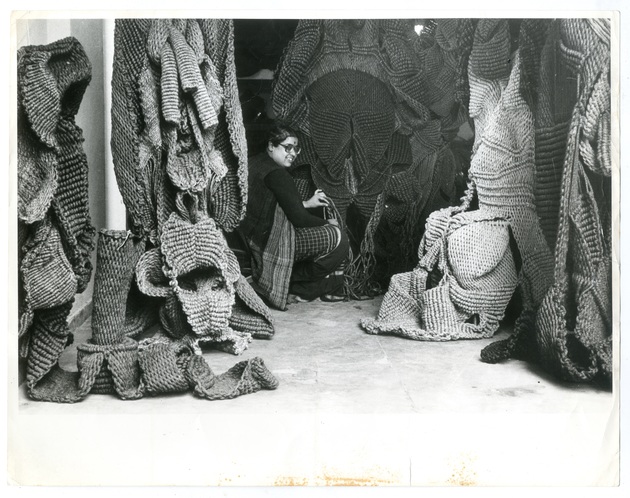 Fig. 3. Mrinalini Mukherjee working on her hemp series in her garage-turned-studio space in New Friends Colony, New Delhi. The sculptures were shown together at her solo exhibition at Pundole Art Gallery, Bombay in 1977. Image courtesy and copyright ©Mrinalini Mukherjee Foundation

Her own “personal mythology,” as she told Iles, “was not rooted in any specific culture,”5 but rather in her experiences growing up in Santiniketan, a utopian community in West Bengal and home to Kala Bhavan, an alternative art school established by the poet Rabindranath Tagore in 1919. It was there at the school that her parents, Benode Behari Mukherjee and Leela Mansukhani, met as students and married in 1944. Her father spent much of his life working and teaching at Kala Bhavan, becoming one of the most influential Indian artists of the twentieth century. “Born out of the need to rehabilitate traditional Indian culture after the demoralizing impact of British rule,” the school broke with formalized teaching conventions in favor of an unstructured curriculum that encouraged experimental thinking.6 Central to the school’s alternative approach was Tagore’s abiding interest in the natural world, including mandated daily walks through the surrounding environment, and his belief in the power of art and craft to promote community vitality. Festivals, music, mural painting, and traditional crafts were all central to the school’s vibrant energy.7

Mukherjee, whose young life was divided between Santiniketan and Dehradun’s Welham Girls’ School in the Himalayan foothills, had initially planned to become a doctor; but in 1965, at the age of sixteen, she decided to enroll in the Faculty of Fine Arts at the Maharaja Sayajirao University in Baroda (now Vadodara), where her father’s student K. G. Subramanyan carried on the philosophies of Santiniketan. “Our art tradition has few parallels in the world for its depth, breadth, antiquity, diversity, and unbroken hierarchy; and even today certain of its modes are active at the folk art and craft level,” Subramanyan wrote in an essay based on a 1971 lecture titled “The Image of the Indian Art Tradition.”8 Calling on fellow artists to take up working in unconventional methods using unfamiliar mediums, he pursued a distinctly postcolonial vision for modern Indian art, one that drew upon the past as a call to action for artists of the future. 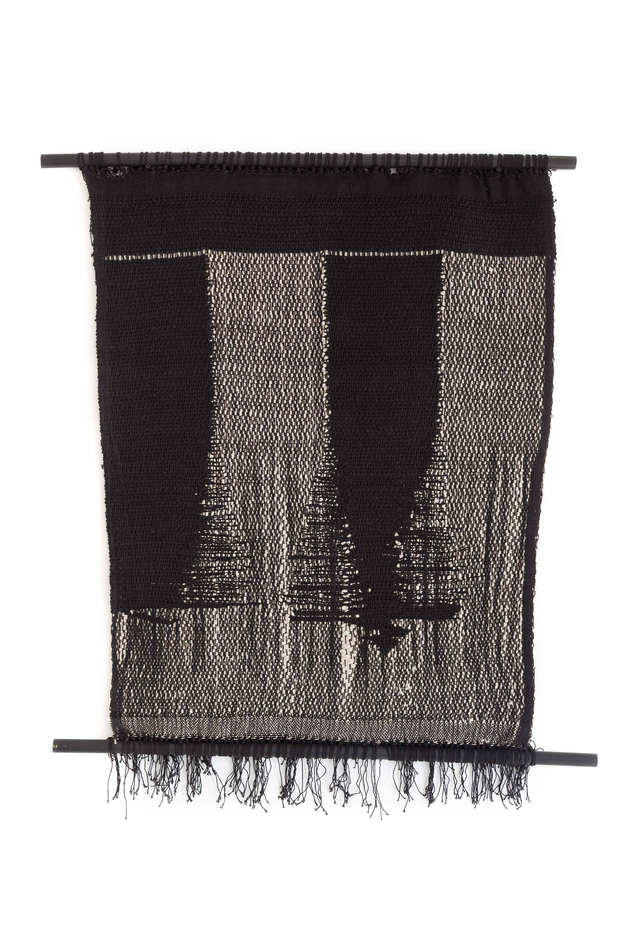 Her upbringing and Subramanyan’s teachings led Mukherjee to discover fiber. At first, she played with a handcrafted weaving armature and then she perfected her work in hand-knotting with a series of wall-based sculptures. Her embrace of the medium was not unlike that of other Indian artists of her generation, including Monika Correa,9 who similarly turned to pliable materials such as jute, sisal, and wool to render woven forms (fig. 4). But unlike Correa, who had trained in the United States under the Finnish-American weaver Marianne Strengell, Mukherjee never sought out the loom. Instead, she mined the possibilities of macramé, an ancient Islamic weaving technique involving hand-knotting, to create her monumental pieces. Her intuitive and unstructured practice was guided solely by an idea, never by a sketch or maquette.10 As she gained experience with her material, she found that the rope could be twisted and turned in a variety of ways, and that it could mimic the sinuous curves of the human body. “My work is physical—my body, my materials, the way of life, the environment, all work together,” she said in a 1993 interview.11 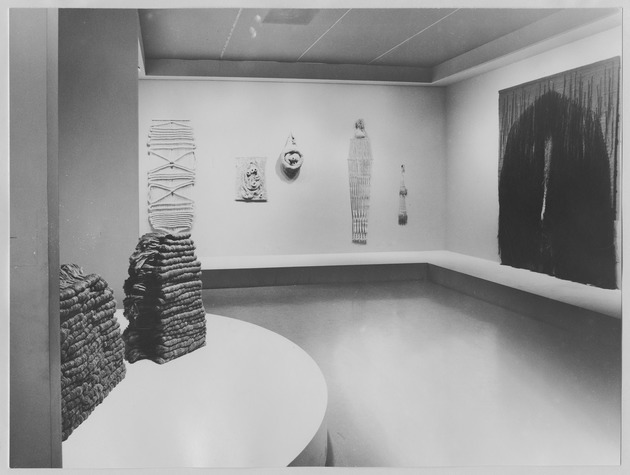 Mukherjee’s investigations into the sculptural potential of fiber, which began with a series of commissions and gallery exhibitions in New Delhi and Bombay in the early 1970s, dovetailed with the emergent Western interest in so-called fiber art in the same period. Artists such as Abakanowicz, Hicks, Tawney, Francoise Grossen, and Aurèlia Muñoz were working in similar formats and materials, experimenting with taking weaving off the wall—and playing with the sculptural properties of a medium long denigrated in the West as overtly feminine and domestic (fig. 5). These artists exhibited internationally, participating in the Lausanne Tapestry Biennials, perhaps the single most important event dedicated to the medium in Europe and the Americas, and railed against the hegemony of the “fine arts”—of painting, drawing, and sculptures in stone and metal.12

Critically speaking, the work of fiber artists like Grossen, Muñoz, and Tawney, whose rope-based macramé sculptures have much in common with pieces by Mukherjee, never found the support achieved by the likes of Post-Minimalist process-art sculptors like Alan Saret, Robert Morris, and Eva Hesse, who also worked with fiber and textile mediums (figs. 6–8). Elissa Auther attempts to explain this tension in in her book String, Felt, Thread, which considers the fraught distinctions drawn between the fiber artists and the Post-Minimalists: “Like so-called fiber artists of the same period, artists such as Saret, Hesse, Morris, and their cohorts made visible the boundary separating art and non-art by recasting fiber, a material socially valued for its utilitarian potential, as useless. . . . Furthermore, the use of fiber on the part of these artists sensitively recorded their physical interaction with material, redirecting the focus of authentic aesthetic experience from the visual or cerebral realm to that of the haptic, bodily realm.”13 As Auther points out, in both realms of practice, the material guided the result, with the process-centered approach itself becoming the work. Despite attempts to reposition the work of the fiber artists in the realm of sculptural fine art practice, even today, the separation between art (Post-Minimalism) and craft (Fiber Art) remains firmly entrenched. 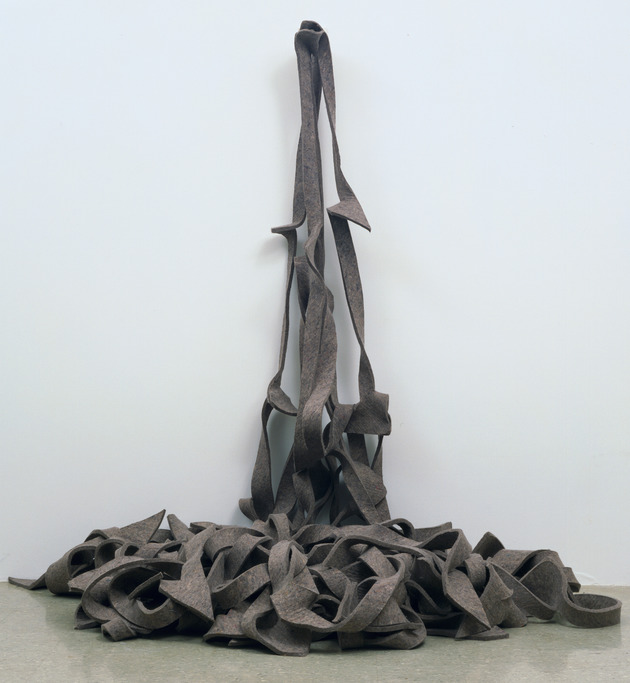 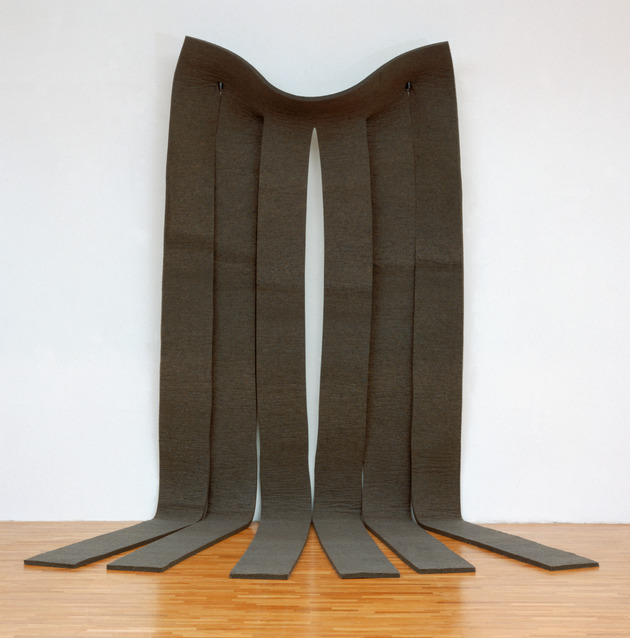 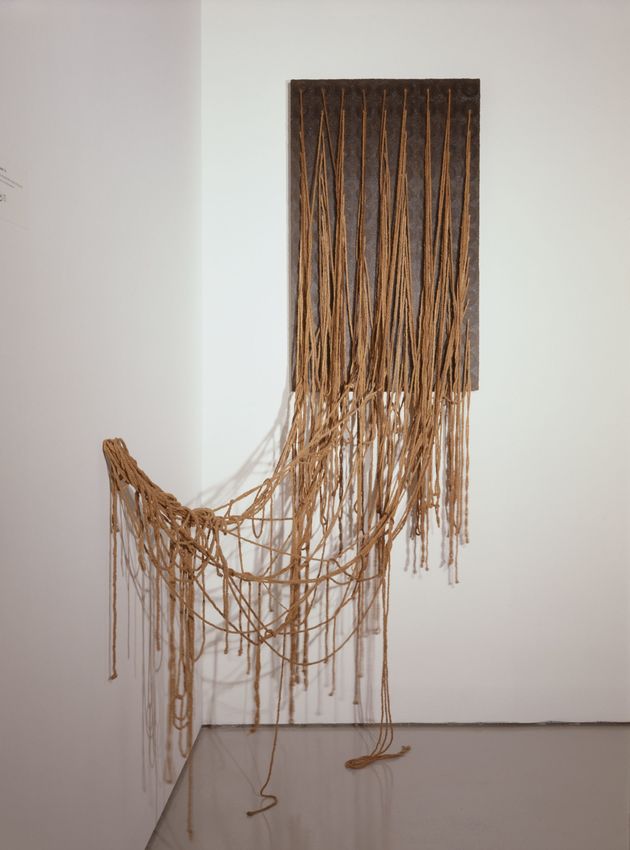 Mukherjee’s position as a sculptor, first and foremost, was protected in part by the relative isolation she experienced globally, despite shared approaches with the international fiber art movement and with process-art sculpture. She did not receive a major exhibition abroad until 1994, when the Modern Art Oxford (then the Museum of Modern Art, Oxford) hosted an exhibition of her work entitled Mrinalini Mukherjee Sculpture (fig. 9), calling her “one of the most significant younger sculptors working in India,” who produces “craft-like organic sculpture on a human-scale.”14 Mukherjee reflected on Western obsessions with the dichotomy between art and craft in her interview with Iles for that show: “In India the arts have always existed alongside each other, at different levels of sophistication. India has an enormous wealth of craft, and I believe in an integrated approach to art and craft. . . . It is through my relationship to my material that I would like to reach out and align myself with the values that exist within the ambit of contemporary sculpture.”15 In the same interview, Iles attempted to position Mukherjee’s work in relation to Robert Morris’s felt sculptures, to which Mukherjee responded: “Though one may find similarities with process-oriented art, I see sculpture as a kind of organic unfolding—hence my choice of materials.”16 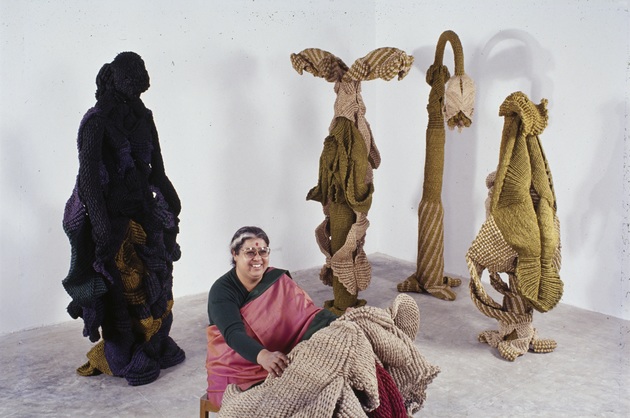 Later in her career, disenchanted with the rapidly deteriorating quality of commercially available rope, Mukherjee turned to ceramic and bronze. But she will be most remembered for her work in fiber, and for giving life to a material “usually meant to be a carrier, rather than a medium of sculpture.”17 Mukherjee’s work “radicalize[d] the meaning of magic by opting for flexible fibre instead of stone or wood—to turn it into a source of strength.” Yakshi exemplifies her ability to draw on the realm of the supernatural to create works that transcend the boundaries that constrained the work of so many other artists working in the West.

The work of Monika Correa, and of other artists working in fiber mediums, including Magdalena Abakanowicz, Sheila Hicks, Aurèlia Muñoz, and Marianne Strengell, is on view in Taking a Thread for a Walk, which showcases groundbreaking work in fiber mediums from the Museum’s collection. The exhibition is on view in MoMA’s third floor galleries through April 19, 2020.

Iles, “An Interview with Mrinalini Mukherjee,” 11.

In 1969, MoMA recognized the work of many of these artists with an exhibition entitled Wall Hangings, organized by curator Mildred Constantine and textile designer Jack Lenor Larsen. Despite its name, the exhibition included works in a variety of shapes and scales, eluding to a newfound Western taste for textile-based art.

Iles, “An Interview with Mrinalini Mukherjee,” 11.

“Partition is what we are living even now”: A Conversation with Nalini Malani

Farkas Molnár’s Vision of the City of the Future

By Adele Nelson
Discuss
ï One work, Many Voices: On view in MoMA’s Reinstalled Galleries Mrinalini Mukherjee: Textile to Sculpture