What Color Is Racism?

What Color Is Racism? 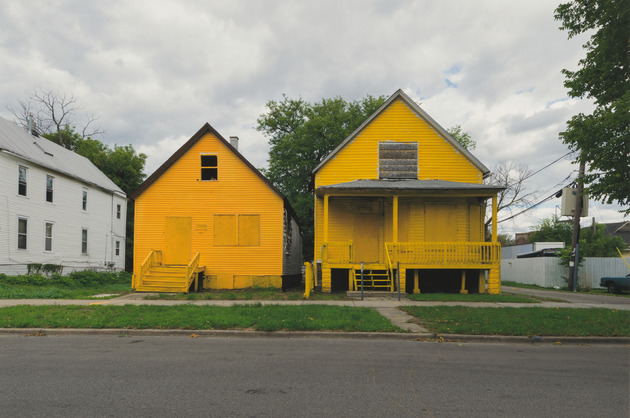 To select the colors for Color(ed) Theory, Williams began with her own memories of growing up on the South Side. The first hue she chose was the bright canary yellow of Currency Exchanges, which as she explains, represent “the kind of building that you would reference through the color and not so much the type or style of building.”2 She then polled friends and family about the colors of products that resonate with their lived experiences before settling on six additional colors of significance: red for Harold’s Chicken Shack; blue/green for Ultra Sheen’s conditioner and pomade; orange for Flamin’ Hot Cheetos; pink for Luster’s Pink Original Oil Moisturizer Hair Lotion; teal for Newport 100s cigarettes; and violet for the velvet bags that contain Crown Royal whisky. 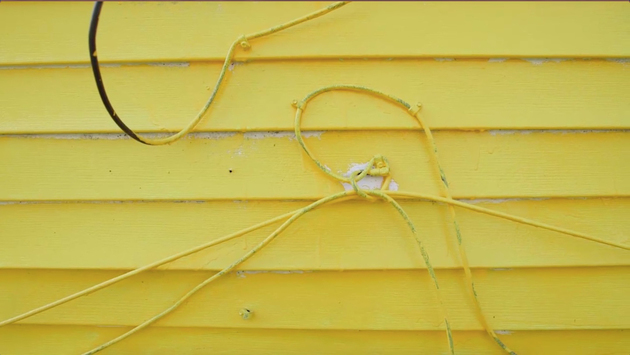 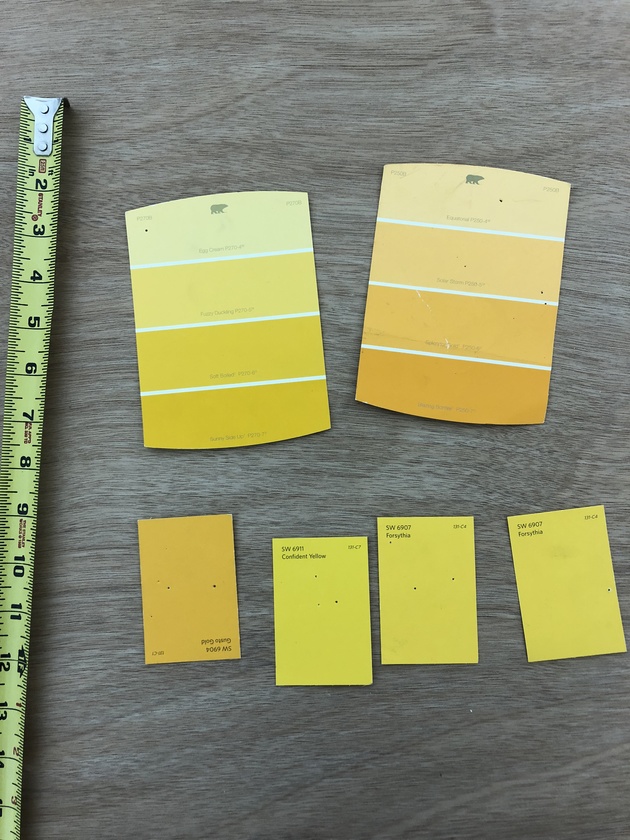 Racial bias and violence are tinged with color: redlining is the systematic denial of various services to residents of racialized neighborhoods; the “Green Book” lists safe accommodations and businesses for Black travelers;3 and members of the KKK wear white hoods. These examples respectively uphold, subvert, or enforce white supremacy. The yellow of the Currency Exchange offices is an extended case in point. Although the segregationist and Jim Crow laws that restricted minority participation in mainstream banking are now illegal, lack of access to major banks remains an obstacle—in Englewood, for example, there are only two such institutions4 —while discriminatory practices continue to push away Black customers.5 (Englewood was particularly hard hit by the predatory subprime mortgage strategy that contributed to the 2008 recession, with a significant number of residents being forced to leave their homes.)6 Moreover, traditional banking can be prohibitively expensive for low-income households.7 In 2017, more than 18 percent of Black Americans did not have conventional bank accounts.8 Together, these factors have caused many low- and moderate-income people to look for alternatives, such as those available through minority-owned banks and credit unions.9 Currency Exchange offices—with their sharp yellow signage—offer many of the same services and so, for those without bank accounts, are a popular option for sending money and making payments. Meanwhile, since the 2016 police shootings of Alton Sterling in Louisiana and Philando Castile in Minnesota, a social media movement has encouraged people to #BankBlack, echoing Black Lives Matter’s message that investing in Black businesses yields positive reverberations throughout Black communities.10 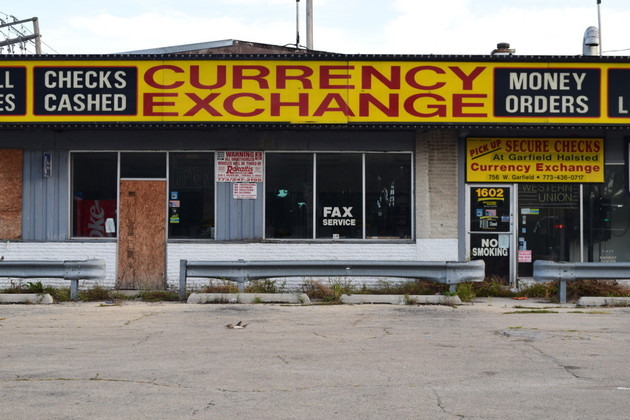 Yellow also refers to the “Safe Passage” program created by the Chicago Public Schools “to provide safe routes for students while traveling to and from school.”11 Adult monitors wearing yellow vests oversee predetermined paths, aiming to be a familiar neighborhood presence by building ties, engaging in conflict de-escalation, and liaising with authorities if necessary.12 The program was started in 2009 after Derrion Albert, a sixteen-year-old student, was killed on his way home from school. A recent study suggests that Safe Passage appears to have significantly reduced reported crime along the designated routes, without increasing police presence in schools and the surrounding community.13 The insecurity of young people’s commutes to school is due in part to Chicago’s long struggle with racialized residential segregation. Consequently, students often have to travel long distances, and in so doing, to cross class, race, and gang lines. These journeys have an indelible effect on their understanding of discrimination and on their expectations of social mobility. As sociologist and criminal justice expert Carla Shedd has argued, “The racial-spatial divide is a significant structural mechanism that captures the array of resources, opportunities, and diversity available to young people and also shapes their ability to perceive, experience, and adapt to discriminatory treatment in education, employment, and housing.”14

As the examples of the Currency Exchange and Safe Passage show, color is a fitting point of entry for investigating the broader context of anti-Black discrimination in the United States. Williams’s title—Color(ed) Theory—itself carries layered interpretations. Color theory is the study of the relationships between colors, bringing to mind Josef Albers’s 1963 treatise Interaction of Color, while “colored” is a dated racial slur: an offensive way of referring to “a person who is wholly or partly of nonwhite descent.”15 Further, one definition of the verb form of color is to “influence, especially in a negative way; distort.”16 Williams’s project speaks both to the discrimination faced by people of color and to the distorted narratives used to justify such unequal treatment. According to Albers, color constantly changes and any one color must always be seen in relation to the colors surrounding it. Similarly, the vivid hues of the Color(ed) Theory houses ask us not only to reconsider the neighboring houses but also the conditions of the community as a whole, with the aim of breaking through ignorance in the face of inequality. 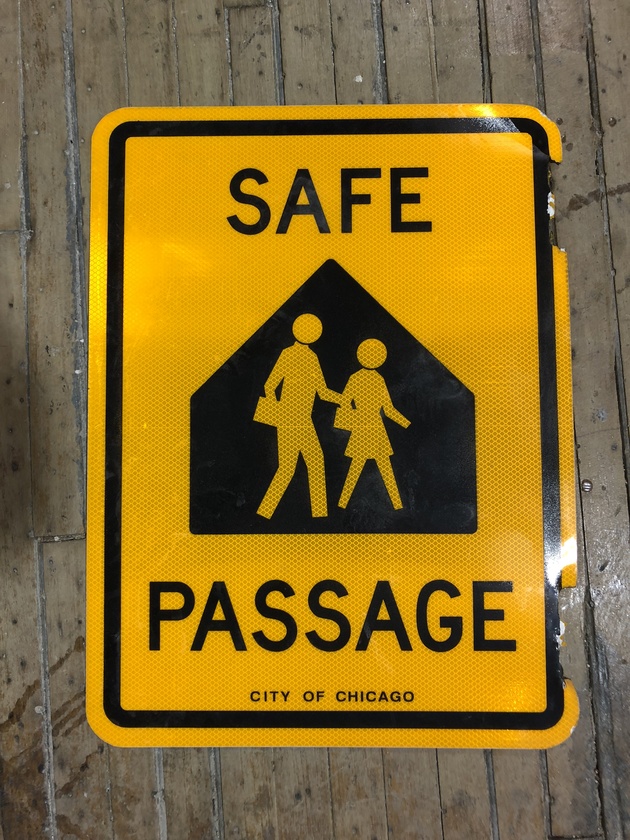 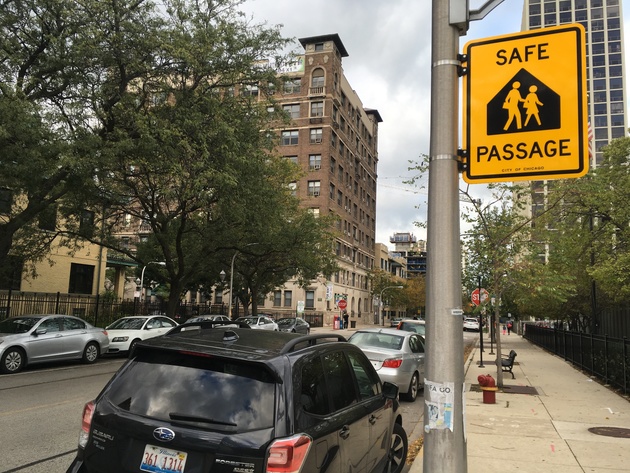 Words like “urban,” “blight,” “ghetto,” and “inner city” are often used in the media as thinly veiled code for Black neighborhoods. Such rhetoric ascribes violence and poverty to predominantly nonwhite communities. Lack of resources and opportunities and the difficulty of accumulating generational wealth are but a few of the visible traces of historical and ongoing residential segregation. At odds with Chicago’s overall racial demographics, in which Black and African American people represent about 30 percent of the city’s total population,17 Englewood’s population is 98.2 percent Black.18 Historically this hasn’t always been the case: Englewood’s earliest settlers, in the 1850s, were German and Irish, followed by Polish and other Eastern European immigrants. By the 1920s, the neighborhood’s population soared to 86,619, with a bustling shopping district that was the second busiest in the city. Following the Great Depression and World War II, however, its aging housing stock and material scarcity impeded redevelopment and rising real-estate values. At the same time, as white flight took hold amid the expanding presence of Black and African American people on the South Side, the larger area became known as the “Black Belt.” Practices such as redlining and the overall disinvestment in Black communities sealed Englewood’s fate as a low-income community. These patterns set the stage for the high-risk mortgage lending that made residents particularly vulnerable to foreclosure, eviction, and repossession.19 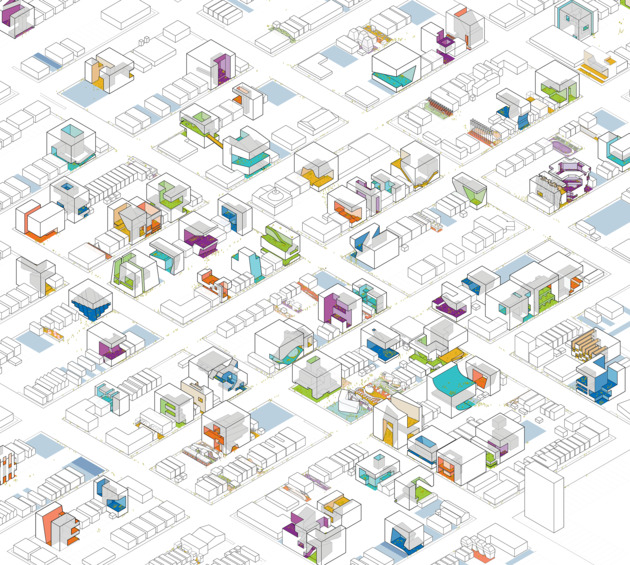 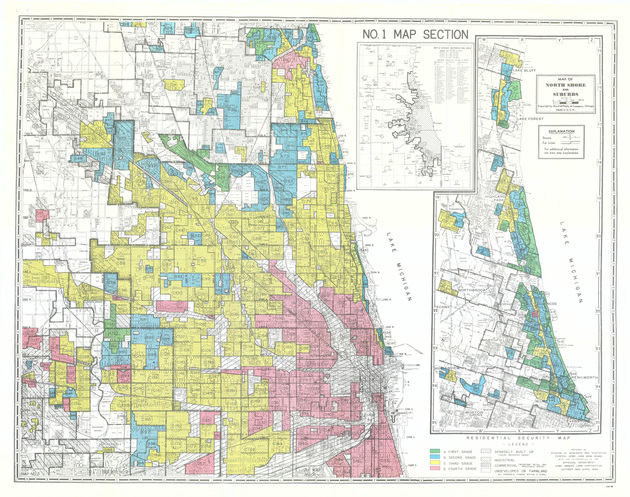 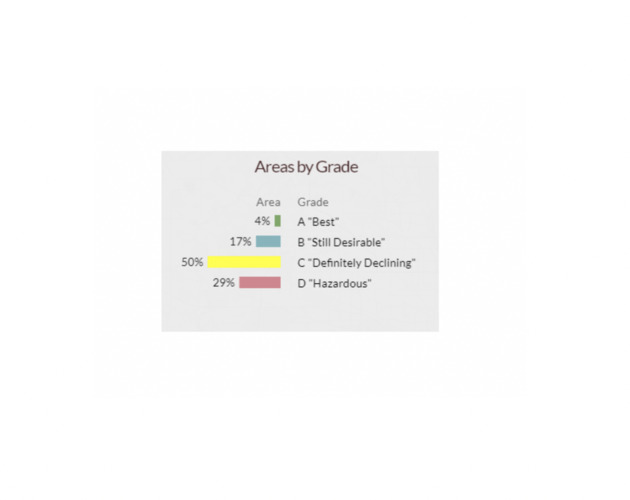 Englewood currently has the highest number of city-owned vacant properties in Chicago, with 1,936 empty lots as of July 2019.20 The inherent urban design potential of these unoccupied lots is the subject of Chicago architect David Brown’s research project The Available City. Brown speculates that by considering such empty spaces as an aggregate rather than as individual parcels, communities with high vacancies could develop interrelated design proposals specific to their needs. Each lot would put forth one “surface treatment”—a “softscape” (for example, landscaping), “hardscape” (playground), or “small building by a local nonprofit organization or the city” (community center, library)—that would be independently viable but gain added value from its connection to other projects on adjacent lots.21 With the flexibility to build at a range of scales and for various interests, neighborhoods in which city-owned lots are most prevalent could be transformed through collective action and private/public partnership. Like Brown, Williams recognizes the dearth of inventive and ambitious thinking to address systemic injustice. Projects such as The Available City and Color(ed) Theory will hopefully catalyze deep consideration—and a response—from other designers and architects. With Color(ed)Theory, Williams harnesses the deep, resonant, and powerful associations of colors—in this case, colors intimately tied to the African American community on Chicago’s South Side—to make a bold statement at an architectural scale. 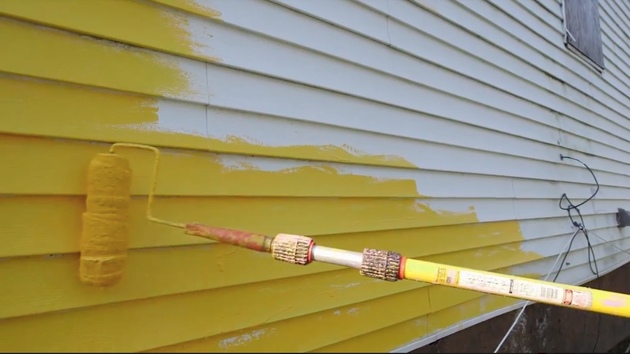 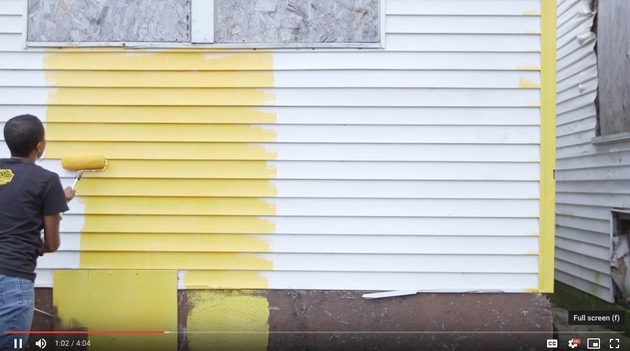 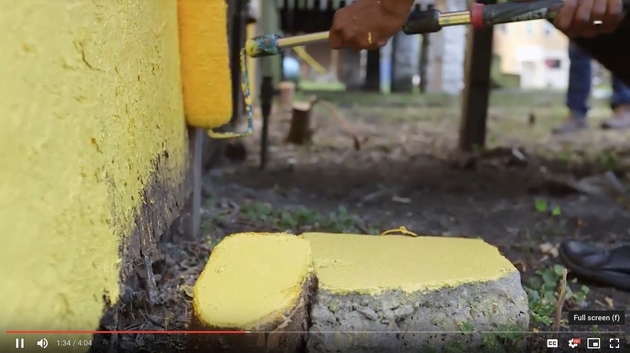 The condemned houses and vacant lots are simultaneously subjects and the literal canvas of Color(ed) Theory. While detractors have criticized Williams for ostensibly generating art tourism or romanticizing poverty, the artist purposefully never announced the locations of the works, which were made to resonate with Englewood residents, not external observers. Even if the pieces have gained a platform in art and architecture circles, Williams “sees her role as an architect to be showcasing the field as a ‘part of the fabric of people’s everyday lives,’”22 and has stated: “I came from these neighbourhoods and I didn’t want to take advantage of people there. There’s a natural scepticism in the South Side about the intentions of those that are claiming to help.”23 Moreover, Williams remains a resident of the South Side. Having grown up in the Auburn Gresham neighborhood she finds beauty in the area in spite of the negative associations attached to it. In a neighborhood deeply scarred by foreclosures and vacancies, the brightly hued Color(ed) Theory houses elicit conversations about the allocation of resources and value, and the links between race and architecture. By creating a site-specific installation, and centering a collaborative approach, Williams’s intervention highlights an important omission in discussions of racialized, low-income neighborhoods: the resilience of the people who, living in them, thrive and advocate for better conditions. In solidarity with this activism, Williams calls attention to the historical forces that still plague Black and African American communities, literally highlighting Chicago’s racial-spatial divide.

Amanda Williams, “Color(ed) Theory Series,” PDF shared by the artist prior to acquisition.

Eleonora Edreva, “Paint the Town: Amanda Williams Explores the Colors of the South Side,” South Side Weekly, October 13, 2015, https://southsideweekly.com/paint-the-town/.

Murakami-Fester, “How Blacks Took Banking into Their Own Hands.”

T. A., “Painting the Town Purple: A Colourful Way of Bringing Attention to South Side Chicago,” Economist, September 21, 2017, https://www.economist.com/prospero/2017/09/21/a-colourful-way-of-bringing-attention-to-south-side-chicago.

Latest discussion on:
What Color Is Racism?

by Phoebe Springstubb
Read More »
This Essay is part of: One work, Many Voices: On view in MoMA’s Reinstalled Galleries

By Linda Hoaglund
Discuss
ï One work, Many Voices: On view in MoMA’s Reinstalled Galleries What Color Is Racism?