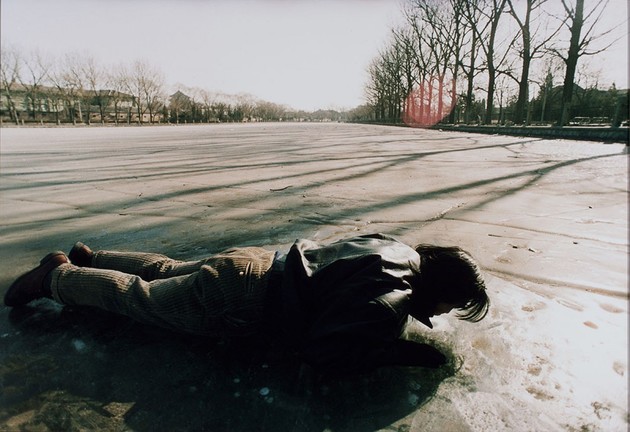 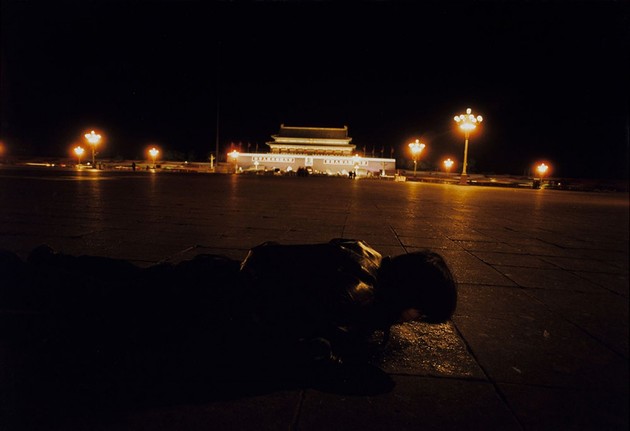 These two photographs, together titled Breathing (figs. 1 and 2), are documentation of a two-part performance conducted by Song Dong in 1996 in Tiananmen Square and on Houhai Lake in Beijing. Song is a leading Chinese artist who works in a wide range of mediums. He is known for incorporating personal and quotidian aspects of contemporary life in his artworks. The first part of Breathing, among his earliest performances and most well-known,1 took place one cold January night in below-zero temperatures, when he lay face down in Tiananmen Square for forty minutes. As he breathed in and out, his moist breath formed a thin layer of ice on the pavement. The next morning, Song continued his performance at Houhai Lake, a manmade lake not far from Tiananmen Square. This time, he lay face down on the frozen lake and breathed for forty minutes, unsuccessfully trying to melt the small area of thick ice directly under his mouth. His wife, the artist Yin Xiuzhen, who was his only intentional audience member, took photos for the performance being shown here. Even though Song managed to create a layer of ice on the pavement of Tiananmen Square, it melted and evaporated the next day, making no lasting impact on the environment. It is easy to see that in both actions, Song’s efforts ultimately proved futile.

Song’s seemingly vain attempts in Breathing, however, are significant in the political, cultural, and artistic contexts of 1990s China. While at this time the Chinese government had begun promoting nationwide capitalist-style economic reforms that made market logic increasingly important in Chinese society, ushering in an age of accelerated consumer culture, it had further tightened its ideological control over Chinese society—in the wake of having quelled the popular national movement for democracy and freedom of expression with the 1989 Tiananmen Square massacre. Chinese cultural professionals, and artists in particular, were subject to a new wave of purge, their activities under close watch and sometimes proscribed. For example, as a consequence of the official denunciations of the 1989 China/Avant-Garde Exhibition,2 contemporary Chinese art in the form of installation or performance was banned from public spaces by the cultural authorities. By the mid-1990s, the combined forces of political intolerance and consumerism had greatly reduced the social and political impact of the intellectual class. In the wake of failed attempts by cultural practitioners during the 1980s to incite political and social change, the artistic community’s outward aspirations in terms of their work was visibly shifted in the 1990s.

It was in this context that several new artistic trends appeared in the early and mid-1990s as younger artists such as Song arrived on the scene. This next generation avoided the socially and politically charged pursuits of their predecessors, instead turning their attention to the subjects of personal life, physical environment, and mundane existence. One outcome of this transition was what art historian Gao Minglu has called “apartment art,” or the installation, conceptual, and/or performance works undertaken by artists in their own apartments or in other private spaces to avoid official interference.3 No longer seeking publicity for their practices, these artists worked in “critical silence,”4 which Gao argues can be seen as a resonant variation of the avant-garde spirit of the 1980s.5 Despite retreating to a private sphere, their taking up of artistic forms suppressed by the authorities constituted a protest, albeit a silent one, against imposed censorship. 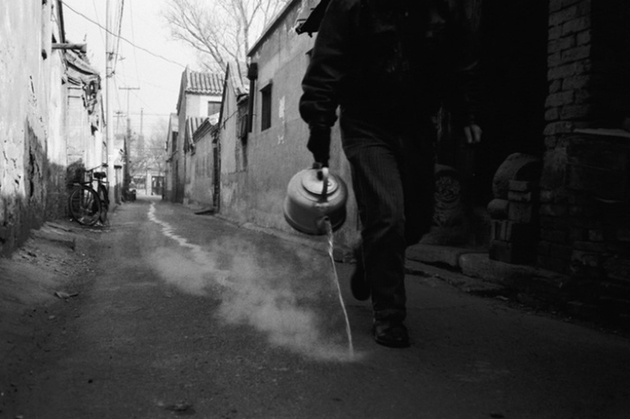 Figure 3. Song Dong. A Pot of Boiling Water. 1995. Performance. Photos of the performance can be viewed at http://www.dreamideamachine.com/en/?p=32332

Song, a key practitioner of “apartment art,” made the predicaments of limited freedom and lack of institutional supports for contemporary art the content of his experimental art, through which he contemplated notions of time, space, and metamorphosis. Using inexpensive household items, the physical interiors of his home, and his own body as materials, he created (sometimes collaboratively with his wife) artworks that merged art with daily experience. His work of this time was private in process, personal in content, and playful in mode—and it related closely to his experience of the everyday. For example, in A Pot of Boiling Water (fig. 3) that Song performed in 1995, he poured boiling water from a pot onto the ice-covered ground in an alley in Beijing. The hot water created swirling fog following him as he moved forward. The fog then disappeared, but a new line of ice was left behind, which disappeared later when the temperature rose. In Writing Diary With Water (fig. 4), which Song began in 1995, he used water to record his daily activities, writing with his finger or brush on the ground, on ice, on the walls, and then on a rock, only to see his chosen medium evaporate—and with it, everything he had transcribed. Central to these experiments of the mid-1990s were his interests in process over results, and in actions that require persistence and physical endurance while yielding only temporary outcomes—if any—of which Breathing is a telling example. 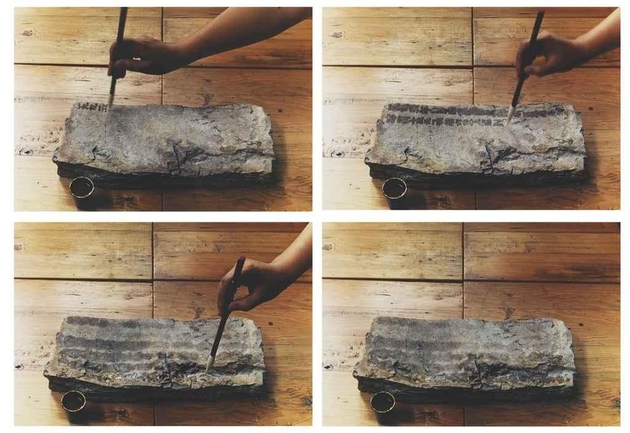 Figure 4. Song Dong. Writing Diary with Water. 1995. Performance. Photos of the performance can be viewed at https://www.mutualart.com/Artwork/Writing-Diary-With-Water/B52655074FEA8B48

Breathing is justifiably discussed in relation to the significance of the spaces in which it was created. The two separate sites that Song chose bear important political and cultural connotations: Tiananmen Square, which has served as the symbolic center of China since 1949, is a place where political power is exercised and manifested with massive state-orchestrated gatherings and processions. Houhai fringes the western border of the Forbidden City and is a popular recreational destination for local residents. Both sites are important public spaces located in the center of Beijing, which might explain why Breathing is often interpreted as Song’s personal expression of the difficulty in executing bottom-up social change within China’s oppressive political system. Choosing to perform at night and in the early morning, Song intentionally avoided a public scene, which would likely have invited intervention by the authorities. Nonetheless, the act of using his own body to initiate a change in these important public spaces, despite being aware of the minimal impact or futility of his actions, is itself a meaningful artistic intervention.

These two photographs have frequently appeared in exhibitions of contemporary Chinese art, including in the groundbreaking Transience: Chinese Experimental Art at the End of the Twentieth Century (Smart Museum of Art, the University of Chicago, 1999) and Between Past and Future: New Photography and Video from China (International Center of Photography, New York, 2004).

For a firsthand account of the exhibition, see Minglu Gao, Total Modernity and the Avant-Garde in Twentieth-Century Chinese Art (Cambridge, MA: MIT Press, 2011), 141–66.

History in the Making, But Who’s Counting? A Critical Analysis of Dialogue (对话) by Xiao Lu (肖鲁)

By Linda Hoaglund
Discuss
ï One work, Many Voices: On view in MoMA’s Reinstalled Galleries Breathing