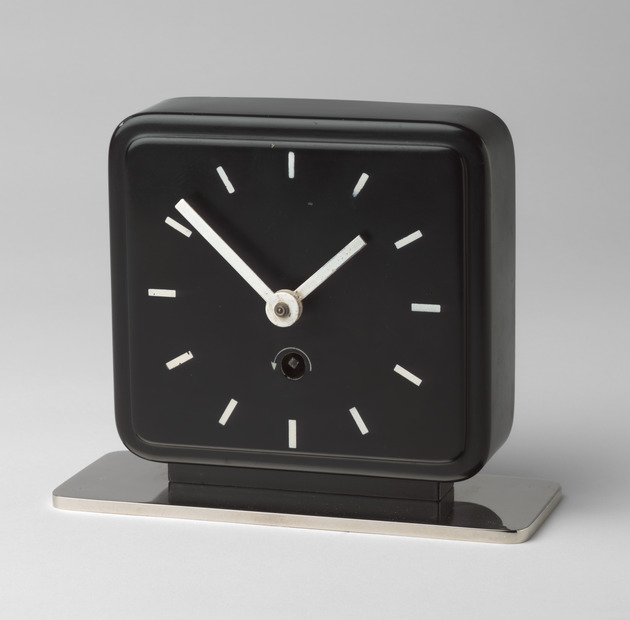 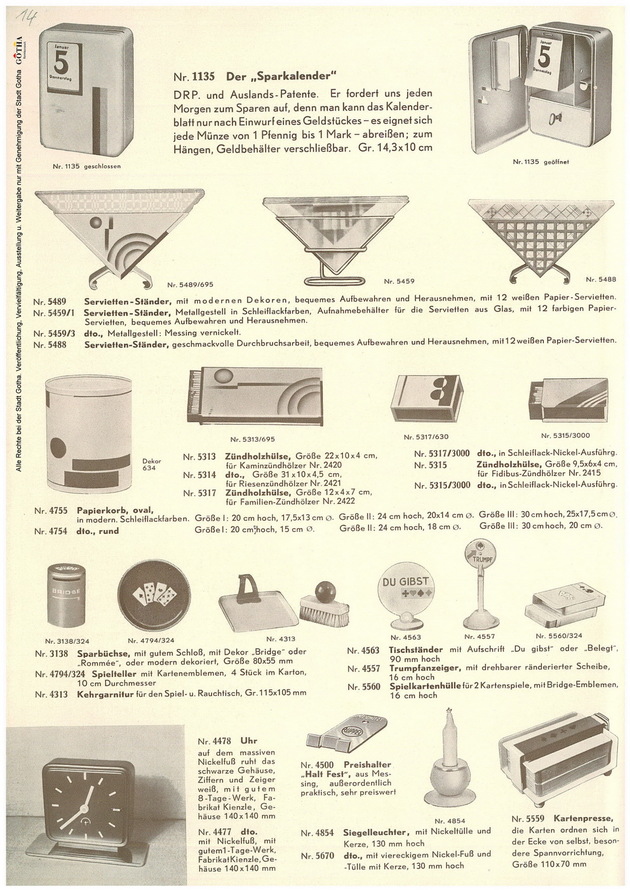 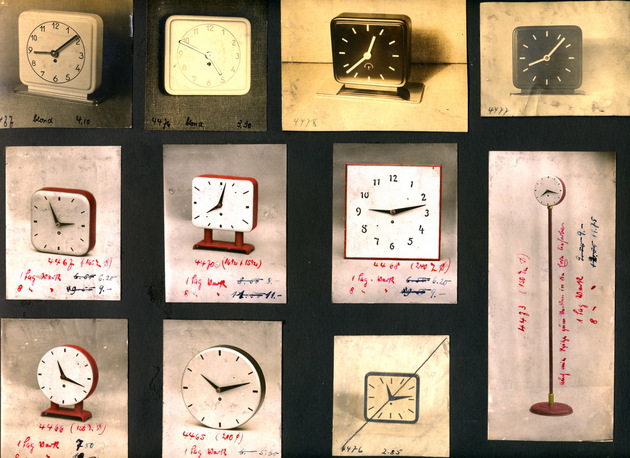 On the square, black, beveled face of Marianne Brandt’s table clock, two oblong hands inch past a dozen simple, painted white bars to mark the time (fig. 1). The hands’ pivot point is a white circle that is perfectly echoed by a dark one just below it, a keyhole in which to insert the key used to wind the clock—counterclockwise, as an arrow indicates—so that the timepiece can slowly unspool the minutes and hours. Appearing almost to hover above the mirrored surface of a chromed plinth, the clockface is left unprotected, that is, without a traditional glass cover. In its simplicity, Brandt’s table clock is the consummate embodiment of the principles of the New Objectivity (Neue Sachlichkeit): an object that is a pure expression of its function. And it also seems to have become the paradigm of modern clock design, for it now appears so standard that, but for its size, it could be mistaken for a contemporary travel alarm clock.1 Brandt’s table clock came in two models: no. 4477, which had to be wound once a day, sold for 3.80 RM; no. 4478 ran for eight days but, at 8.50 RM, cost more than twice as much—a high price in Depression-era Germany (fig. 2). This was one of a number of clock designs that she originated or updated for Ruppel (fig. 3).2 In the MoMA clock, Brandt, a Bauhaus alumna and the former acting head of the school’s metal workshop, created an iconic Bauhaus object: simple, stark, and sleek. Its rounded corners and chrome-and-black color scheme suggest furniture designed by her Bauhaus colleague Marcel Breuer (fig. 4), whose B91 desk (fig. 5) she used throughout her life. In its pure color scheme, gleaming metal, rounded edges, and functionality, the clock also evinces creative kinship with the tea and coffee sets she designed in 1924, her first year at the Bauhaus (fig. 6).3 But unlike these sets, which, made of silver or nickel silver and ebony, offered refined refreshment only to those who could afford their high price, the Ruppel table clock achieved the Bauhaus’s goal of uniting art and technology in a design affordable to a broad public.4

Brandt was hired by the Ruppel company in December 1929 to save itself from an ignominious fate: expulsion from the famed annual Leipzig design fair. Ruppel Brothers (Gebr. Ruppel), as the company was known when it first opened in 1894, specialized in mass-produced metalware for both local and export markets. While it was successful in production and distribution, by the late 1920s, its designs had become hopelessly old-fashioned, even kitschy. Brandt came to Ruppel with the Bauhaus name behind her, which, by 1929, had become synonymous with cutting-edge, practical design.5 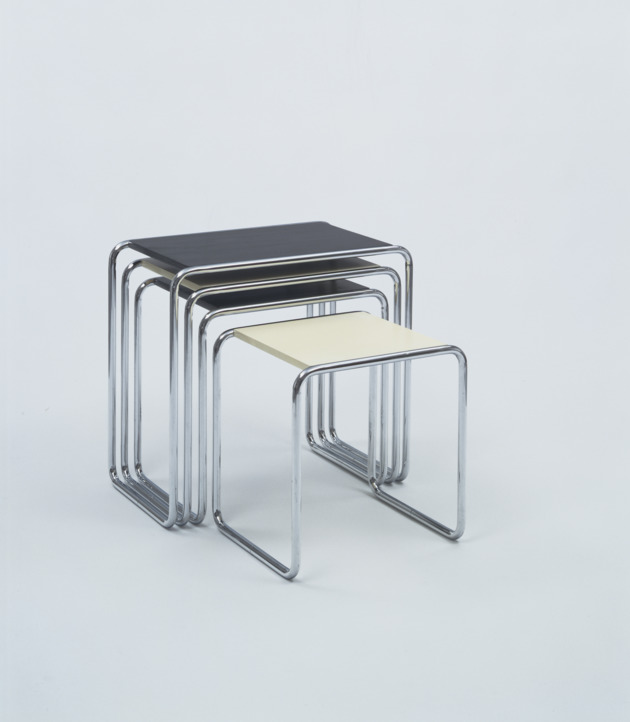 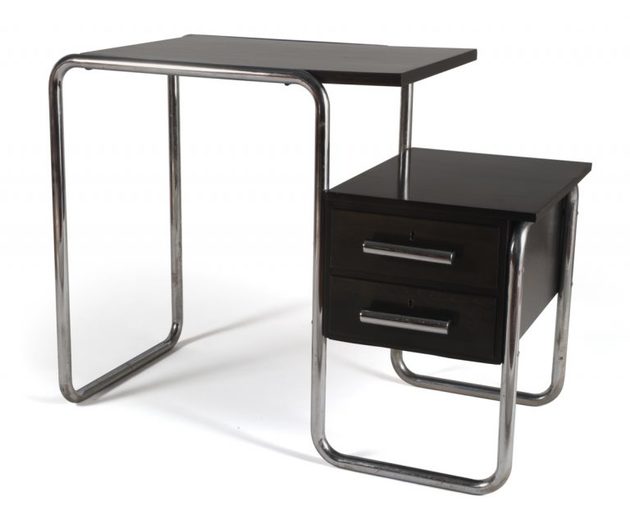 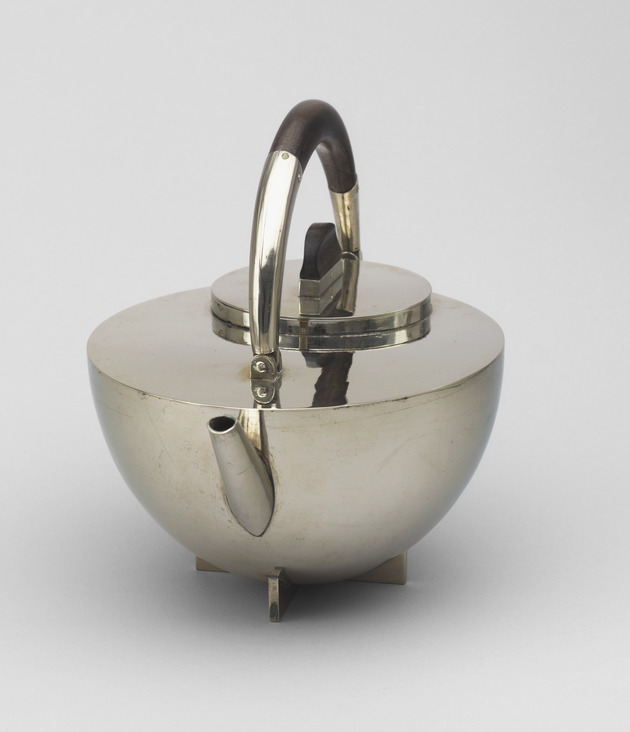 For the better part of five years, from 1924 to 1929, Brandt had been a leading presence in the Bauhaus’s metal workshop, an astonishing fact given that it was one of the most male-dominated divisions of the school. Over the span of its existence, only eleven of the sixty-seven students who joined the workshop were women.6 With the exception of Brandt, those women who did join did not remain. In the end, Brandt was the only one to receive her degree in metal.7 She was also a photographer, and while at the Bauhaus and particularly during a 1926–27 hiatus in Paris, made series of photomontages that capture the dynamism of modern life and media culture. Many of these works, such as Our American Sisters, depict the “new woman,” a contemporary ideal appearing everywhere from advertisements to the silver screen (fig. 7).8 By 1924, during her first semester in the workshop, Brandt had created other useful objects, including an ashtray whose smoldering contents could easily be tipped into an airless receptacle below (fig. 8). By 1927, László Moholy-Nagy, who headed the metal workshop at the time, selected her to serve as his assistant (Mitarbeiter). In this capacity, she negotiated contracts with the firms Körting & Mathiesen in Leipzig, and Schwintzer & Gräff in Berlin for the mass production of the metal workshop’s lighting designs (figs. 9, 10). When Moholy-Nagy left the Bauhaus in 1928, Brandt took over as the workshop’s acting director, a position she left of her own accord in 1929, citing, in a letter to then Bauhaus director Hannes Meyer, challenges to her leadership and a desire to return to full-time design work.9 She departed in July, once she had secured a position designing furniture and interiors for the architecture firm of the Bauhaus’s founder and first director, Walter Gropius, in Berlin. Her employment in Gropius’s firm proved intermittent, however, and so in December 1929, she accepted the job with Ruppel in the relatively provincial Thuringian city of Gotha. 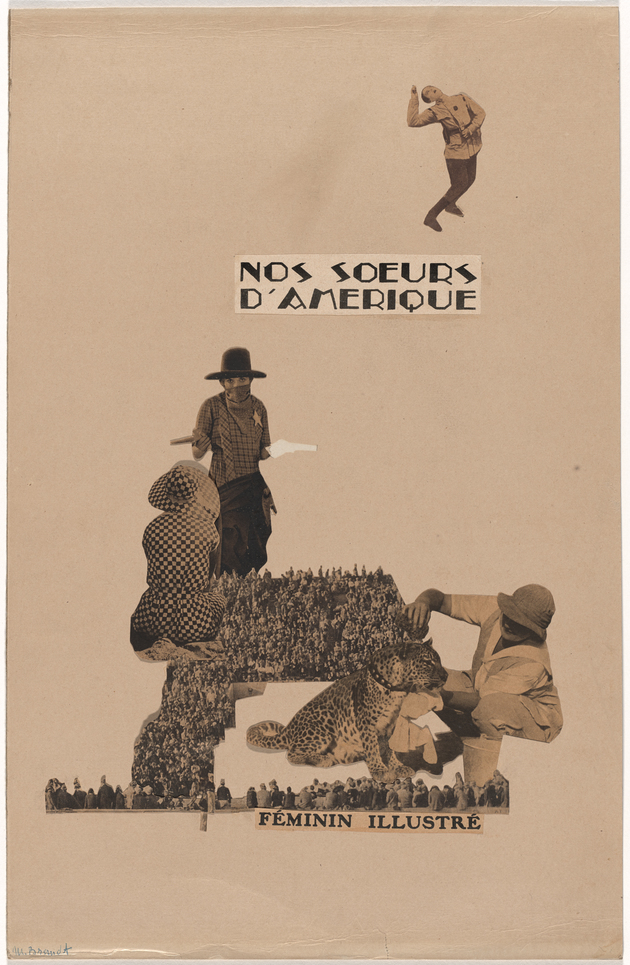 The year 1932, likely when the table clock went into production, would mark the high point of Brandt’s design career but also, ironically, its end. The Great Depression forced Ruppel to dismiss a number of its employees, and Brandt, having successfully redesigned their product lines for home and office (fig. 11), lost her job in October of that year. She was unable to find work during the subsequent National Socialist period, and after the war—though she served as an important mentor to a few young designers of the German Democratic Republic—her impact was limited by a regime suspicious of Bauhaus modernism.10 Although no one could have known it at the time, Brandt’s small table clock now stands as the crowning testament to all that she achieved in the space of less than a decade; it is a timepiece that marks the end of an era. 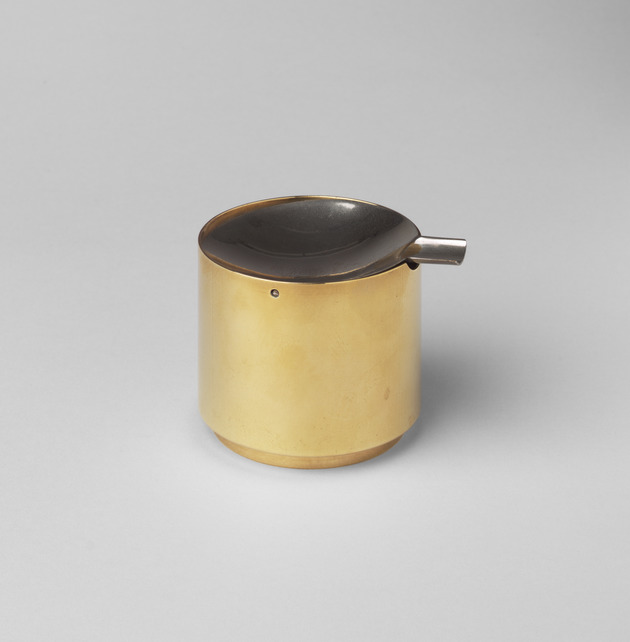 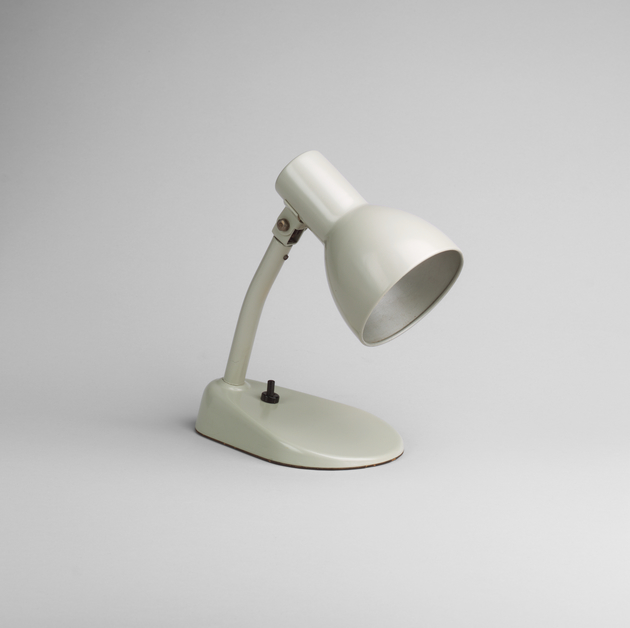 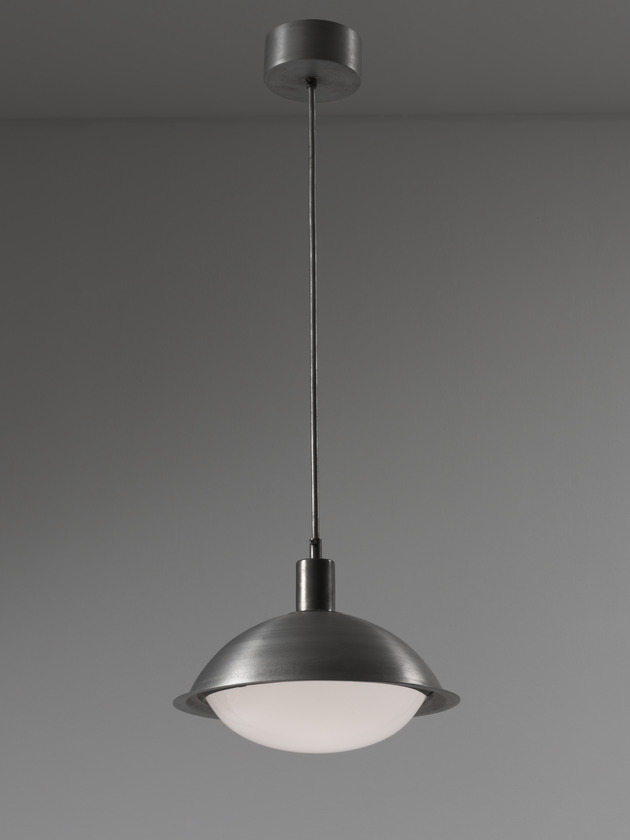 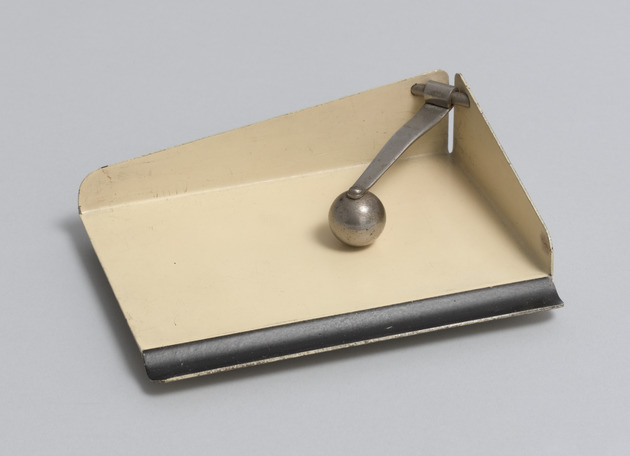 Information on this clock’s design and manufacture was kindly shared by Klaus Blechschmidt, an expert on Marianne Brandt’s work at Ruppel. According to Blechschmidt, the firms of Kienzel and Junghans both manufactured the clockworks used in this model. In the early 1930s, Ruppel also manufactured a small series of the clock for the Ohler ironworks for use as a promotional gift for the latter firm’s clients. It was almost identical to the clock in MoMA’s collection except that the top of its base is imprinted with the words “Ohler Eisenwerk Theob. Pfeiffer-Ohle i/W,” the official name of the ironworks and that of its senior director, Theobald Pfeiffer. Klaus Blechschmidt, email correspondence with author. For more on Brandt’s work at the Bauhaus and Ruppel, see Elizabeth Otto, “Marianne Brandt: 1893–1983,” in 4 “Bauhausmädels”: Gertrud Arndt, Marianne Brandt, Margarete Heymann, Margaretha Reichardt, ed. Patrick Rössler, Kai-Uwe Schierz, Miriam Krautwurst, and Elizabeth Otto (Erfurt: Angermuseum/Dresden: Sandstein Verlag, 2019), 84–107.

The Bauhaus masters coined the slogan “art and technology: a new unity!” in the fall of 1922 to signal their shift away from craft and an expressionist aesthetic. See Georg Muche, Blickpunkt: Sturm, Dada, Bauhaus, Gegenwart, 2nd ed. (Tübingen: Wasmuth, 1965), 30. Robin Schuldenfrei points out that, while the teapots and other items from this series appear to encapsulate “all of the concepts that modernism proclaimed—Sachlichkeit, functionality, hygiene, and the use of modern materials and construction methods,” they were, in fact, “laboriously hand-wrought in the Bauhaus’s workshop at great cost.” See Schuldenfrei, Luxury and Modernism: Architecture and the Object in Germany, 1900–1933 (Princeton: Princeton University Press, 2018), 139.

The path to innovation was to some extent already paved for Brandt by her Bauhaus metal workshop colleague Wolfgang Tümpel, who had been hired by Ruppel the year before, in December 1928. He left the job after two weeks for reasons that have not been recorded; Helga Wilfroth speculates that, at the time, his designs were probably too radical for the company’s leaders, but that they may have helped to prepare them to accept Brandt’s ideas a year later. See Wilfroth, “In Gotha kam das Bauhaus auf den Küchentisch,” in “Modern, aber nicht modisch”: Bauhauskünstler in Gotha (Gotha: Stiftung Schloss Friedenstein Gotha, 2009), 19. Klaus Blechschmidt reasonably speculates that Brandt might have learned of the Ruppel position from Tümpel.

Brandt’s Bauhaus diploma, which details her activities during five years at the Bauhaus, was signed by Hannes Meyer and dated September 1929. Collection Bauhaus-Archiv Berlin.

Brandt’s photomontages are the subject of my book Tempo, Tempo! The Bauhaus Photomontages of Marianne Brandt (Berlin: Jovis, 2005).

Unpacking Barr’s Library: The Paper Trail from the Bauhaus to VKhUTEMAS

Workshops for the New Woman: Loheland at 100

This Essay is part of: Many Places in One: International Connections in MoMA’s Collection One work, Many Voices: On view in MoMA’s Reinstalled Galleries