By Sarah Lookofsky Posted on September 5, 2018

By Sarah Lookofsky Posted on September 5, 2018 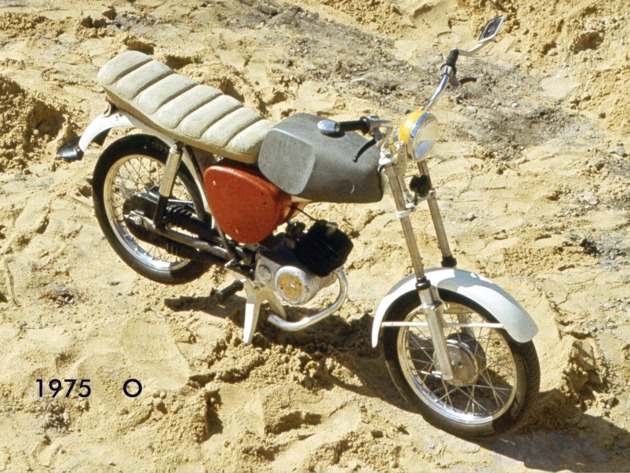 The Mokick S50 series is a design classic from the German Democratic Republic (GDR), the Communist East German state that existed between 1949 and 1990. Conceived by Karl Clauss Dietel with Lutz Rudolph in 1967 and produced under the Simson name from 1974 to 1990,1 the motorcycle is defined by a linear clarity in which its structural components, such as the gas tank, seat, and motor, are clearly defined and delicately separated from one another. This design sets the Mokick apart from a common motorcycle typology in which a uniform, molded body disguises the underlying mechanics. As an object of industrial manufacture, with interlinking aesthetic and functional properties, the Mokick is interesting to consider not only in relation to the econonomic context of the GDR, but also, more broadly, in relation to the history of postwar design.

A group of MoMA staff met with Dietel, a pivotal industrial designer in the GDR, in his home in Chemnitz, where he showed us examples of his creations for East German production—including typewriters, radios, and public sculpture—and introduced us to his long career of formal invention with the aims of fabrication and use within the context of a Communist state. Particularly revelatory was his statement that the motorcycle’s form was inspired by the compositions of Jean (Hans) Arp in which singular forms are autonomous yet still contribute to a cohesive whole. This aesthetic structure was given utilitarian function in what has been termed the “open principle” (das offene Prinzip), in which each component of the motorcycle is compositionally independent, with space around it. This construct not only facilitated easier repair of individual parts, it also has availed the vehicle to modification and technological improvement over the course of the sixteen models that constitute its production history. This includes, for instance, upgrades to the motor in 1980 and 1982, updates to the the gas tank in 1978 and 1981, and the addition of a rev counter in 1982. 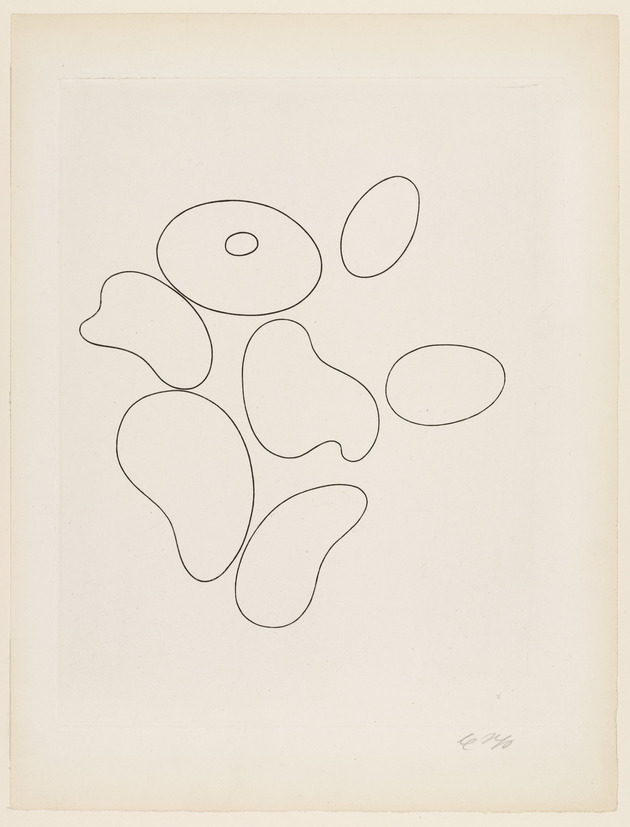 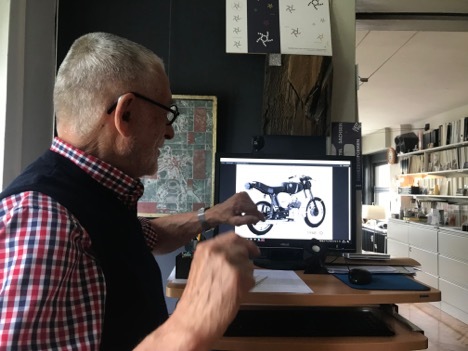 Karl Clauss Dietel in his home and studio, discussing one of his Simson motorcycle designs, Chemnitz, Germany, 2018

Dietel—while acknowledging that censorship, intervention by the state, and limited resources put severe constrictions on creativity in the GDR2—was insistent that his work should be seen not only as belonging to an isolated history of GDR production but also as part of a longer tradition of German industrial design. As such, he sees his vehicle designs, which include designs for the iconic East German Trabant, as connected to a strong tradition of automotive production in Germany in which Chemnitz was an important prewar center.3 In our conversation, Dietel also recognized the important influence of the Bauhaus, where his professors at the Kunsthochschule in Berlin-Weißensee had trained, which is clearly resonant in the Mokick’s functionality. He also emphasized the inspiring work of Marianne Brandt (German, 1893–1983), the legendary Bauhaus teacher and also a resident of Chemnitz, who was his mentor and close friend. 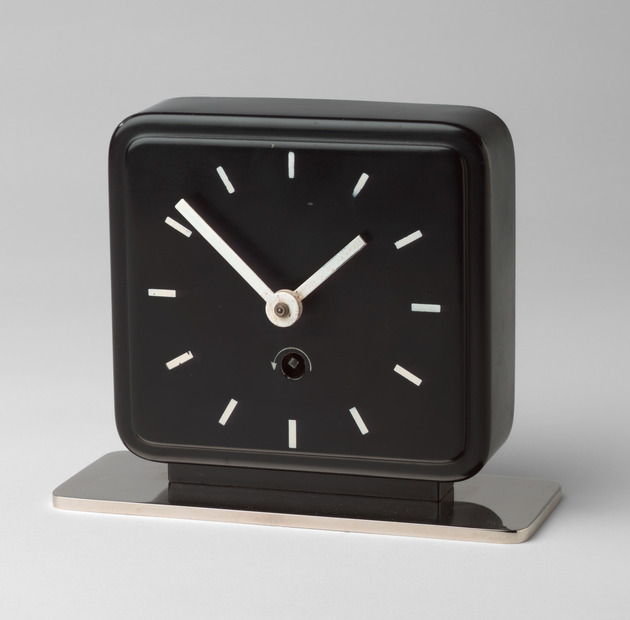 Dietel further called attention to the fact that his products were sometimes ahead of their Western counterparts, describing, for example, a transistor radio that features a particular speaker construction later used in Sony models, which are more recognized. Toward the end of our time together, I asked Dietel about his knowledge of Western design objects while he was working in the GDR. Recognizing in my question the supposition that the GDR must have been copying Western precedents, he responded by stating that not all objects in the West were good, and not all objects produced for the GDR were bad. 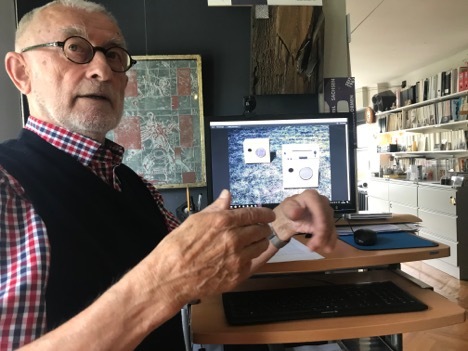 Karl Clauss Dietel explaining his 1964 design for a radio that pioneered a speaker construction later featured in a Sony product, Chemnitz, Germany, 2018

Though the Mokick S50 series must, of course, be understood within an economic context in which product longevity was bound to resource scarcity and the absence of a consumer economy, the design has clearly withstood the test of time. Throughout our trip, the model still, more than twenty-five years after production of it ceased, can be spotted on German streets—no doubt owing to the fact that its freestanding parts continue to enable ongoing tinkering by contemporary aficionados. While a product of its time, the S50 series is nonetheless striking in its contemporaneity: the notion of an ever-customizable product appeals to ideals of sustainable design that counter the ecological effects of an economy based on planned obsolescence, just as the principle of inventing with a view to later modification is in tune with iterative digital design that is premised on continual improvement upon use rather than on a final product.

Current resonances aside, this GDR motorcycle holds its place in the history of industrial design as well as in the postwar global legacies of the Bauhaus. Although the Bauhaus was accused of decadent formalism and thus officially repressed by the East German state,4 its impact clearly extended to objects manufactured within the GDR system, including to this design that brought utilitarian purpose to Arp’s compositional syntax. As such, this vehicle not only offers a fecund example for a broader study of the functionalist aims and manifest outcomes of the Bauhaus, it also unsettles a historical approach that seeks to uphold an iron division between Eastern and Western useful things.

Simson, a company that produced firearms, automobiles, bicycles, and motorcycles, was founded in Suhl by the Jewish Simson family. During the Nazi era, the family fled, and the company was expropriated and renamed. In the postwar period, while under GDR ownership, the Simson name was restored. The factories continued to produce motorcycles until 2002. Fandom and DDR-Fahrrad wiki websites, accessed July 25, 2018, see http://motorcycles.wikia.com/wiki/Simson and http://ddr-fahrradwiki.de/Simson

As Dietel relayed to us, he became an industrial designer in part because his family had owned a car dealership and were thus considered bourgeois, which prevented him from studying at the university.

Auto Union, a union of four automobile manufacturers and the predecessor to the car company Audi, was based in Chemnitz.

The overlaps between the Bauhaus and East German design is a topic that will be explored in an exhibition at the Dokumentationszentrum Alltagskultur der DDR in Eisenhüttenstadt, a site we also visited on the trip. During our visit there, I discussed the relationship between the Bauhaus and the design of the GDR with one of the organizers of that future exhibition, Steffen Schuhmann, professor of Visual Communication at Weißensee, Kunsthochschule Berlin, who emphasized that despite the fact that the Bauhaus was repressed by the GDR system, the influence on its industrial production was undeniable.

Lines of Official and Unofficial Art in the GDR: Karl-Heinz Adler and Geometric Abstraction

Berlin and Beyond: The GDR and the East