The Museum of Modern Art Kunbi Oni is an Administrator in the General Counsel's office at The Museum of Modern Art in New York and a faculty member of the School of Visual Arts with more than 10... Read more »
Show Less
Click here to visit the current discussion about this essay.
Keywords: "Primitivism” in 20th Century Art: Affinity of the Tribal and the Modern, Picasso: Sculpture, Trocadero Ethnography Museum, African modernism, African art history, Picasso
Closing the Gap: Picasso and Narrating More Specific African Identities in Modernism
Essays

It is well established that in 1907 Pablo Picasso came across a variety of African masks and other African objects in different contexts but settled on the Trocadero Ethnography Museum (now the Musée de l’Homme) as his primary resource.1 Encountering these objects would precipitate his “Africa Period,” the time between 1907 and 1909 when his investigation and analysis of the African mask and figure would lead to the dissection of form in his painting and sculpture, and to the flattened curves and planes characteristic of works such as Woman’s Head (Fernande). Together with his contemporaries, he revolutionized Western artistic practice with this shift, heralding the avant-garde. The Trocadero opened in 1882 with displays of both ancient and contemporary African objects, most from the French colonies in Africa. As is reflected in the institution’s own description of its first period, little thought was given to these objects as being the result of artistic production: “Between the lack of funds and the inflow of new objects from the colonies, and despite the best of intentions, the museum had begun to look like nothing more than a giant curiosity cabinet.”2

Similarly, in MoMA’s 1984–85 exhibition “Primitivism” in 20th Century Art: Affinity of the Tribal and the Modern slightly more than a century later, William Rubin explains that Primitivism is “anchored in tribal (rather than exotic court) objects—heretofore considered just curiosities—and involved an appreciation of both their affective ‘magical’ force and their plasticity.”3 And he goes on to maintain an attitude of a singular cultural focus:4 “I want to understand the Primitive sculptures in terms of the Western context in which modern artists ‘discovered’ them.”5 Today, more than three decades later, we are more than ready to reconsider how we engage with the twentieth-century “traditional” African objects embedded within the modernist narrative.6 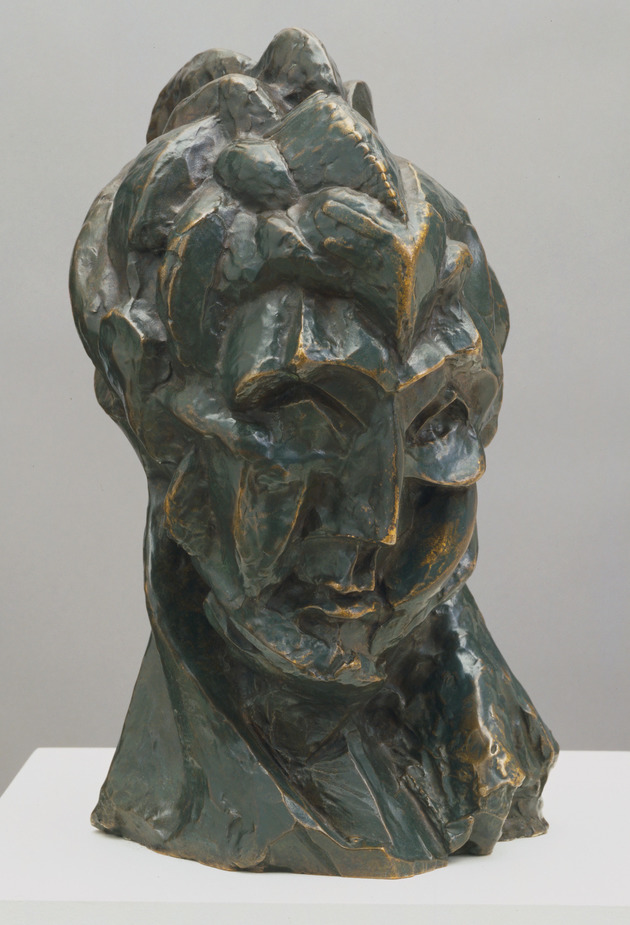 In the Museum’s 2015–16 exhibition Picasso: Sculpture, Picasso’s status as a self-taught sculptor is emphasized.7 By likening his practice to that of the self-taught artist—or, by extension, artists not academically trained, such as the traditional African artists—we increase the number of shared attributes between artists and can more readily think of them as closely aligned. If we can commit to this way of thinking, then we can perhaps continue by identifying the artists who emboldened Picasso to “break all the rules,” by name, culture, or country of origin as is the standard.8 Paul Gauguin was the harbinger of Picasso’s transformation, and subsequently Umberto Boccioni named Picasso as the main influence for his own sculptures of 1913.9 And these three artists are further tied to both past and more recent histories, connections not afforded traditional African artists. We know that “none of the African pieces Picasso saw in his first few years of fascination with ‘art nègre’ were more than just decades old,”10 and that they came from a set of cultures11 in the region of West Africa.12 These details are readily available.13 The added benefit of specificity is that it allows us to begin to chip away at the idea of Africa as monolithic, and to understand that traditional African sculpture encompasses different forms and types. Applying this small detail makes it possible to deepen our scholarship and to broaden our scope—and thus, potentially, to provide us with a new way of telling the story of modernism and to offer more accurate ways of seeing and developing new audiences.

This attitude was heavily critized in Thomas McEvilley’s review of the exhibition in Artforum. In his wide-ranging challenge to the premise of the exhibition, he appeals for an evolved perception of the primitive works: “After fifty years of living with the dynamic relationship between primitive and Modern objects, are we not ready yet to begin to understand the real intentions of the native traditions, to let those silenced cultures speak to us at last? An investigation that really did so would show us immensely more about the possibilities of life that Picasso and others vaguely sensed and were attracted to than does this endless discussion of the spiritual propinquity of usages of parallel lines. It would show us more about the ‘world-historical’ importance of the relationship between primitive and Modern and their ability to relate to one another without autistic self-absorption.” Thomas McEvilley, “Doctor Lawyer Indian Chief: ‘Primitivism’ in 20th Century Art at the Museum of Modern Art in 1984,” Artforum 23 (November 1984): 54.

“From a twenty-first century viewpoint, these works in their original form have a startling contemporaneity. Their unalloyed enthusiasm for the banal and seemingly amateurish assembly resonate closely with a present-day attraction to humble materials, ordinary objects and technical approaches that show no evidence of skilled training.” Anne Temkin and Anne Umland, with Virginie Perdrisot, Luise Mahler, and Nancy Lim, Picasso: Sculpture (New York: The Museum of Modern Art, 2015), 26.

Augustus Casely-Hayford, “Way of Being: Some Reflections on the Sainsbury African Galleries,” Journal of Museum Ethnography, no.14, Papers Originating from MEG Conference 2001: Transformations, The Pitt Rivers Museum, Oxford (March 2002): 120–21.

“Taken together, the Kota and Hongwe reliquary figures—certainly the most abstract of the tribal sculptures Picasso encountered—constitute, along with Baga figures, and Fang masks, and reliquary heads, the most important African prototypes for his art from June 1907 until the summer of the following year.” Ibid., 266.

Kota in Gabon, Baga and Fang in Guinea, and Baule in Ivory Coast.

Entwining Caribbean, British, and American Art Histories: Trouble at the Turn of the “...

Identity and Abstraction: Ernest Mancoba in London and Paris, 1938-1940

By Joshua I. Cohen

Sculptures are always beckons me. Despite the fact that the paintings or any other visual exhibitions were very fascinating, the sculptures always caused me a special delight. Who agrees with me?